KIRKLAND, Wash. -- Amy Johnson, previously Amy Long, is a mom to three kids, a sister and a newlywed.

She looks so happy celebrating her wedding on Facebook.

Problem is--the pictures on the account aren't of Amy.

"That’s me and my husband," said Kirkland newlywed Cheyenne Gillooly. "That’s our wedding."

The pictures are of Cheyenne and her husband Carl, along with a few members of her family.

"There's not a single picture of another person on these profiles," said Gillooly. "It is 100% all of our photos."

"I absolute hate it. It's violating," said Gillooly, who found numerous profiles using her pictures while on her honeymoon.

It's unnerving and a complete violation, but something Cyber Security Analyst Linda Criddle says happens more often then you'd think.

"You’d like to think that you own your face," said Criddle matter-a-factly.

Criddle has trained law enforcement online and is an author of three books on internet safety.

"It is violating. It is weird to see your face with somebody else’s information--made up information or not," said Criddle.

She says most of the time people don’t even know their a victim.

"It's far more frequent that it would go undetected. Unless it's one of those I hate you scenarios, where 'I want you to know because I'm being mean to you'," said Criddle.

It was detected in this case.  Cheyenne was alerted after her wedding photographer received a message to view more of Cheyenne's wedding photos.

"It alarmed her so she screen-shot it and sent it to me and asked, 'Do you know this person?' and I said not at all," said Gillooly.

"It was just like this endless pit of… us," said Gillooly. "I started to click through the profiles and the pictures. I saw fake profiles of my sister. Not just profiles, but… life--like her life. Like of this made-up life mixed in with her real life."

Each one using her or her sister’s photos, like they were their own property.

"We had a great wedding. It was a good time. My husband's awesome," laughed Cheyenne. "But that’s not your fun to share --its not just a stolen photo, you're actually pretending to be people with our faces. That’s weird."

What’s hardest for her to wrap her head around is why?

"It makes me sick," said Gillooly. "It consumed the last week of my honeymoon."

"You could say that imitation is the highest form of flattery," said Criddle, who's seen a number of fake profiles. "They’re like a little kid trying on mommy’s clothes, you know playing dress up in a very weird way."

Creepy--but at this level, Criddle says it's not a crime.

"It’s not really impersonation.  It is against the terms and conditions of the site."

According to Facebook's legal terms on the site, users must agree to provide their real names and information.

"You will not provide any false personal information on Facebook, or create an account for anyone other than yourself without permission." 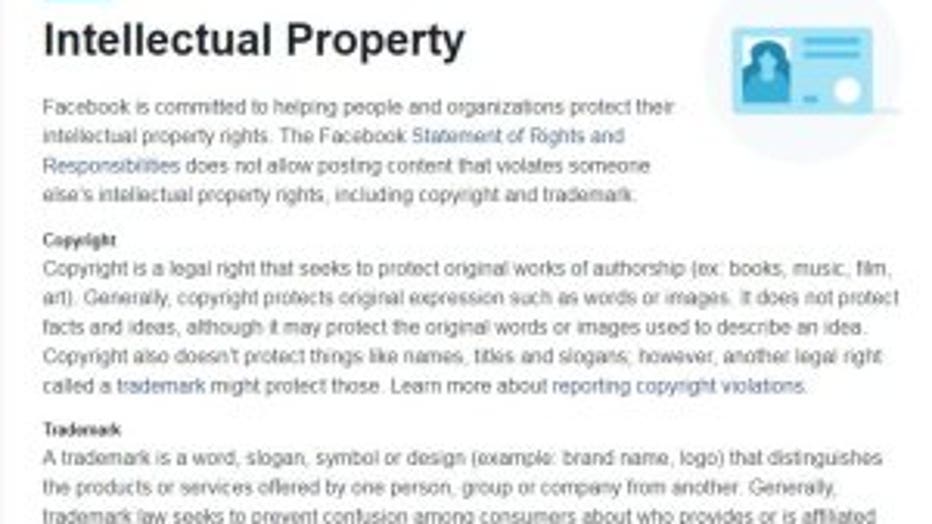 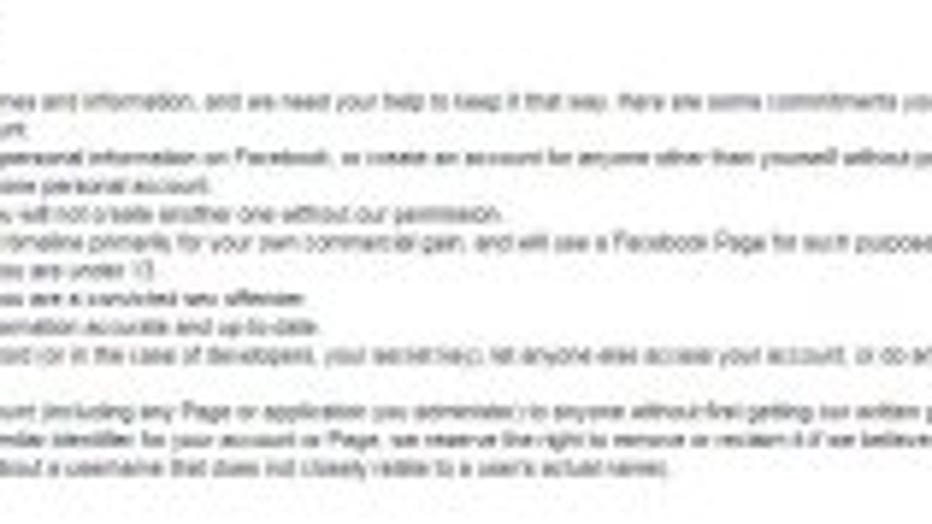 But it's illegal when someone is doing it to bully, harass, threaten or extort someone.

And if a user is using your mug to scam someone out of money---it’s fraud.

"It should always be reported--in this case to Facebook. What’s really unfortunate is Facebook makes it almost impossible to actually reach a person," said Criddle.

Even her friends have reported it.

Each time this was Facebook's response: 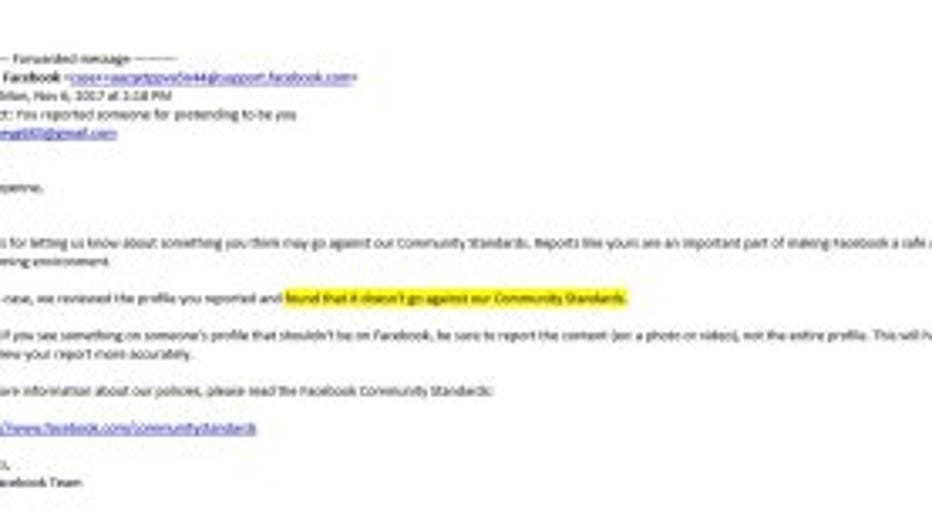 "They don’t enforce that unless something is truly egregious and law enforcement comes to them with you know subpoenas or requests for information," said Criddle. "You cant get a hold of them because they don’t want to have to respond to this. If you're a large company, all traffic is good traffic. All of the traffic is generating money for you. It’s the number of ads that hit on a page. So, really cutting down and being hard core about not  accepting abuse on the site actually cuts into revenue."

We tried reporting the profiles and individually stolen pictures ourselves and even reached out to the whoever “Amy Johnson” is -- asking them to take the pictures down, but have not received a response.

"The person sniffs like a sad and lonely person who wants to borrow somebody’s better life," said Criddle.

That doesn't provide much solace to Gillooly, who along with her sister is struggling to feel safe, even outside the internet.

"It makes me angry and sad," said Gillooly. "It's not just a pretty photo—its my life."

Cheyenne admits she could've locked up her security preferences better – but the  photos weren't posted on her Facebook. They were shared in a slideshow video by her wedding photographer--something that wasn't exactly easy to save.

Either way, Criddle says even if you’re Facebook is locked up like Fort Knox – you could have similar problems if you have friends who have wide open security settings.