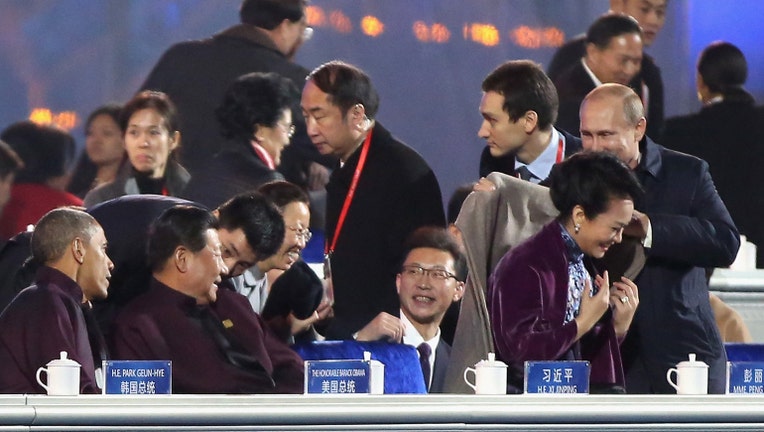 HONG KONG -- It was fleeting moment, but one that Chinese censors were quick to snuff out.

At an APEC event to watch the fireworks in Beijing on Monday night, Russian President Vladimir Putin created a few of his own by slipping a shawl over the shoulders of Peng Liyuan, wife of Chinese President Xi Jinping.

A smiling Peng Liyuan kindly accepted the offer, but seconds later deftly slipped the shawl off into the hands of a waiting aide.

The small act of chivalry, quickly but politely rebuffed, unfolded live on state television, with voiceover from a CCTV anchor stating simply: "President Putin has placed a coat on Peng Liyuan."

A hashtag based on the same words quickly gained momentum on social media where the video was posted and reposted, according to Foreign Policy. However, by morning, there was little trace of it left.

Searches for the video and hashtag on China's twitter-like Weibo and messaging service WeChat turned up a smattering of comments and broken links, leaving users to surmise that China's Internet police had deemed the material too potentially damaging to share.

Some remained though, including this link to the photo with the loosely translated comment: "China's first lady's boundless charm wins over Mr. Putin."

A still image seems to show Putin glancing in Xi's direction as he draped the shawl. There's been no comment from Xi, who was sitting nearby, talking with an aide and President Barack Obama during the exchange, which has been dubbed "coatgate" by some media outlets.

China's state news agency, Xinhua, had no reporting on the incident, nor did state television network, CCTV.

It remains unclear what Putin's intentions were. Was he trying to further warm relations with Beijing? Or was there just a chill in the air?

The headline in the Sydney Morning Herald announced that Putin"cracks on to" the first lady. Slate said he "flirts with" Peng, while Foreign Policy went with "hits on."

At least Putin didn't try to snap a selfie.

That would have really sent the censors into overdrive.