A Tulalip Fish and Wildlife police officer is missing and presumed dead after a rogue wave hit a patrol vessel, causing it to capsize, Tulalip police said.

EVERETT, Wash. - The U.S. Coast Guard has suspended its recovery search for a Tulalip Tribal Police Department officer who was thrown into Puget Sound Tuesday night after a rogue wave hit and capsized the boat he and another officer were on. 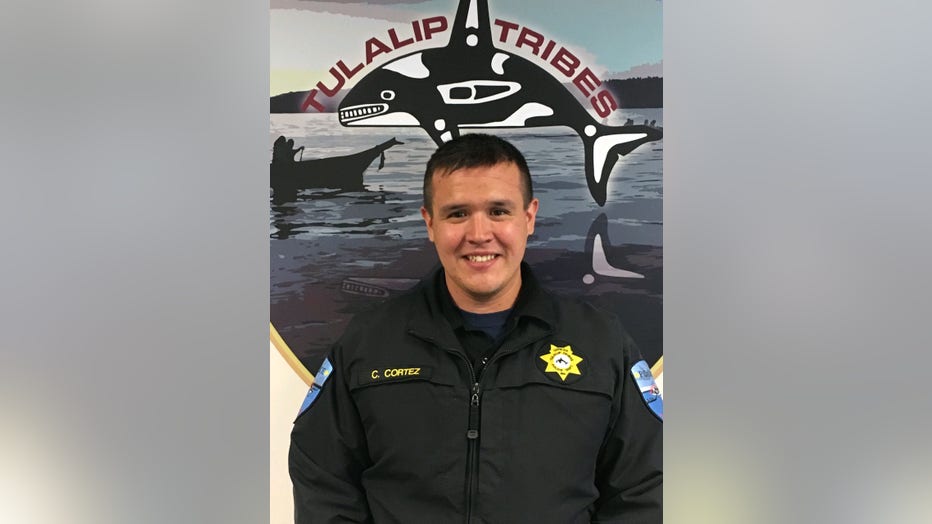 But that doesn't mean the dozens of other agencies involved in the search are giving up hope in bringing him home. Tulalip Tribal Police Chief Chris Sutter says the search will continue.

According to Tulalip Tribal Police, the incident happened about 8:30 p.m. Tuesday when two tribal wildlife and fishery officers were returning to Tulalip Bay Marina and the wave hit their 24-foot vessel. Both men were thrown overboard.

Multiple agencies continue the search for a missing Tulalip Tribal officer who was thrown overboard after large wave hit his vessel while investigating a potential poaching incident.

Officer Shawn Edge, the boat's captain, was rescued near Hat Island and is being treated at a local hospital. Chief Sutter told Q13 News on Wednesday that Edge was rescued quite a ways from the shore when officials arrived.

Officer Charlie Cortez, 29, is still missing and presumed dead. He's been with the department for three years and is the first Tulalip Tribal Police officer to die in the line of duty.

"As our search and rescue effort transitions to a search and recovery, we are heartbroken," said Tulalip Chairwoman Teri Gobin. "Our people are connected to the water and we know what we risk when we go out. Today we lost a good man, a father, brother, and son. Our hands go up to the many fishermen and rescue workers who answered the call to find our missing officer. In the face of tragedy, our community came together and we will continue to come together as we take care of his family."

Sutter said the conditions on the water last night were extremely dangerous and rough. The officers were investigating a potential poaching incident near fishing grounds.

"They were out doing their duty protecting the fishing grounds and also investigating a potential poaching situation. They were diligently doing their duty. They do this every day, they are very well trained experts," said Sutter.

Sutter acknowledged the conditions officers must work under while on the water. He said the search area is extensive and that the department is committed to finding Cortez. He said Cortez is not just considered a coworker, but a brother and friend to those who worked with him, dedicated to serving his community.

"He is a father, a son, and a brother to all of us. We haven’t given up hope. We’re praying for a miracle," said Sutter.