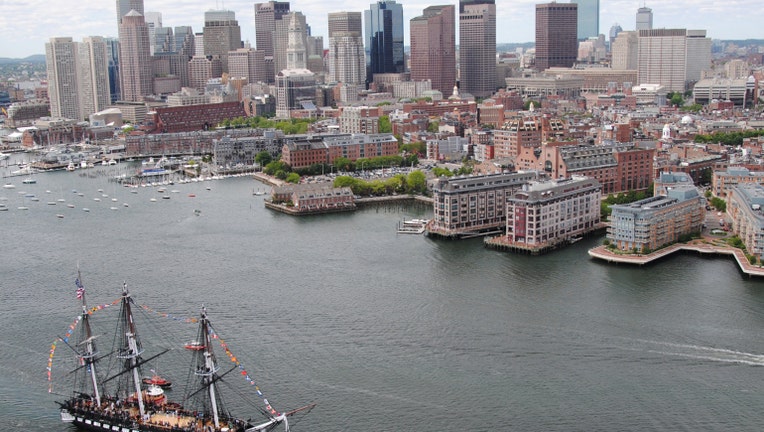 In this image provided by the U.S. Navy, the USS Constitution sails into Boston Harbor during an underway Battle of Midway commemoration on June 3, 2011 in Boston, Massachusetts.

BOSTON -- A crew is at work in Boston unearthing a time capsule believed buried by patriots Samuel Adams and Paul Revere.

The 18th-century capsule was left in a cornerstone of the Massachusetts State House, CNN affiliate WBZ reports. The capsule is believed to date from 1795, when construction started on the building.

The cornerstone has been removed because of repair work to the historic building, and a worker from the Museum of Fine Arts in Boston was chipping away at it Thursday to get at the capsule.

The capsule contains rare coins, a Paul Revere plate, papers and other artifacts dating back to the 1600s, said Massachusetts Secretary of State William Galvin, who also heads the state's historical commission.

Galvin told CNN that its contents are expected to be revealed sometime next week.

"As soon as the box is freed from the stone, we will show the box, then send it to the MFA, they will X-ray it over the weekend and open it sometime there next week," he said. "The contents are of concern, but the plaster that held the box in place is in good condition."

The capsule was last dug up during emergency repairs to the State House in 1855 and put back in place when the cornerstone was reset, he said.

"There were some coins that were tossed in the 1855 ceremony in the mix of the mortar. They are in good condition so we are optimistic that the box itself has withstood the test of time and that it will therefore be holding the contents securely," Galvin said.

"What we know the box contains, based on the notes that we have, is a Paul Revere plate, papers, and coins from the 1600s. It may contain other stuff too, we don't know that yet," he said.

The Secretary of State's office is looking into whether the box will be reinstated and whether new items from the current era will be added to the box and reburied.

WBZ's Mark Katic continues to report on the capsule removal and has been live-tweeting this afternoon.