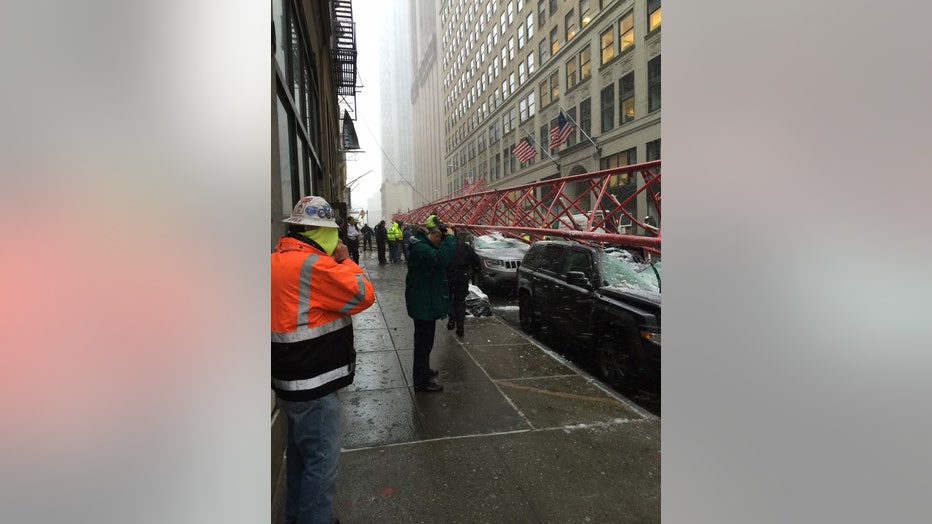 NEW YORK -- One person was killed and three others injured when a 565-foot crane collapsed during Friday morning's rush hour in snowy Lower Manhattan, authorities said.

The lone fatality was a man sitting in a parked car. Police identified him as David Wichs, 38, a Manhattan resident.

The crawler crane was being lowered into a secure position, with construction workers keeping pedestrians and traffic away from a busy street near New York Law School, when it hurtled to the ground, de Blasio said.

The crane's manufacturer required that it be secured when winds reached 25 mph, the mayor said.

"You can see how powerful the damage was, but you can also see that it was something of a miracle" there were not more casualties, de Blasio said.

As a precaution, the city immediately ordered the 376 crawler and 53 tower cranes in operation in New York be immediately secured, officials said.

Building inspectors had been at the site of the collapse a day earlier after granting approval for the crane operator to add an extension, bringing the crane to 565 feet, according to de Blasio. The work was found to be in "full compliance."

The impact of the hulking crane may have damaged underground gas mains, and utility inspectors were checking for gas leaks, officials said. A leaking water main was shut down.

'You realize how good it is to be alive'

"It felt like an earthquake," said Barbara Varas, who lives a block away.

She said she had been avoiding the street because the crane seemed unstable.

Varas "heard a big rumble" and had a feeling the crane had fallen, she said. She was walking her two children to school when it happened.

Sarah Holoubek said she "absolutely lost it" after the crane tumbled to the ground.

"I realized I had just walked under the crane," she told CNN affiliate WPIX. "You realize how good it is to be alive."

Glenn Zito, a construction worker at another building, said heavy winds forced him and others at their work site to move to lower floors. He noticed the nearby crane swaying.

"They decided to start lowering it," Zito said of the crane, CNN affiliate WABC reported. "It gained speed, and then it flipped over. ... It was shocking."

Nesh Pillay, who was getting married later Friday, her sister Kuvanya and their mother were getting their hair done at a nearby salon when the crane came down.

"People were just running down the street," said Kuvanya Pillay, who was stuck in the salon with the bride-to-be and their mother for two hours after the street was shut down.

Nesh Pillay said she put on her wedding dress in the salon, a fire department chaplain threw a NYFD jacket over her shoulder and then escorted the trio to City Hall Park. The chaplain herself officiated.

"We wanted a really quiet wedding," Nesh Pillay told CNN. "For a time, it didn't feel like it would even happen."

The cause of the collapse was being investigated by police and building department officials.

"The fact is this is a very, very sad incident. We lost a life," de Blasio said. "Thank God it was not worse."

City officials said there were no complaints or violations at the construction site.

Greg Galasso, whose Galasso Trucking company was operating the crane, declined to comment.

There was no immediate comment from the crane's owner, Bay Crane.

The crane was being used to replace generators and air conditioning equipment on the roof of a building on Hudson Street, officials said. The work started on January 30.

"It looked scary from day one," Jaime Gee, who works nearby, told WPIX. "Watching them hauling the cooling towers with these tiny cables. ... It was just a matter to time before it came down."

Some buildings in the immediate area were evacuated because of the possibility of gas leaks as well parapets that were in danger of collapsing, fire officials said.

Twitter lit up with images showing the towering crane lying on a city street, crushing some cars, as first responders rushed to the scene.

Some showed the crane, including its tracks, upside down with its boom resting alongside several buildings.

The New York City Fire Department dispatched more than 40 units with more than 140 firefighters to the scene at 40 Worth St. and West Broadway after the crane collapsed shortly before 8:30 a.m.

New York Law School evacuated its campus and canceled classes until Monday because of the collapse, spokeswoman Silvia Alvarez said.

New York was under a winter weather advisory Friday morning, with the forecast calling for snow and sustained winds between 16 mph and 18 mph, and gusts as strong as 29 mph, according to the National Weather Service.

But city officials said snow did not appear to be a factor.

Story is developing. Visit WPIX.com for the latest updates.