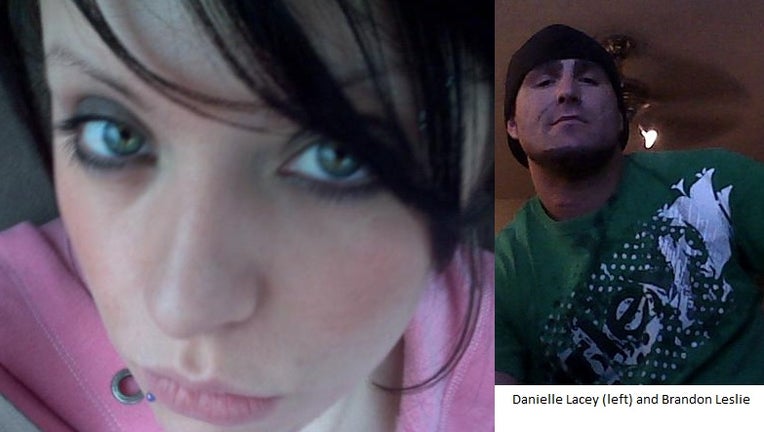 Police documents said that Danielle Lacey and Brandon Leslie are being held on $150,000 bail each. They have been charged with endangerment with a controlled substance, criminal mistreatment and incest. The allegations of incest stem from the fact that the pair have the same mother.

Authorities gave the baby to Child Protective Services, and Lacey's other children, ages 5 and 6, are in the care of her father.

Police said a witness spotted Lacey, 22, and Leslie, 35, sitting in a car smoking meth Friday evening in the 6100 block of 57th Avenue NE. The caller said she was concerned because she saw a baby in the back seat of the car, and all the windows were rolled up.

Daniel Price, a local resident, said he was the one who called police.

"They said they were out of gas and asked if they could borrow $10," Price said. "I knew something was going on so I went inside and they told me they were smoking meth with the baby in the car. Everyone had a discussion and it was time to call the police."

Police arrived to find the Lacey holding the baby in the front passenger seat. According to the police report, the baby was wearing a shirt and diaper, but did have on pants or socks. There was allegedly no blanket to keep the baby warm, and the heater wasn't turned on because the car was out of gas. Police said Lacey appeared to be high on methamphetamine because she exhibited sudden, jerky movements and the inability to concentrate.

During an interview with detectives, Lacey allegedly admitted she had smoked meth multiple times while all three of her children were in the car. Lacey’s other children are five and six years-old and live with their grandparents.

“Everyone in this household was compelled to call 911 because of the baby in the vehicle," Price said. "If they want to go out and do that themselves, hopefully they don’t hurt anyone but when you have a one year-old involved that’s a lot different.”

The couple were arrested and are being held in the Snohomish County Jail. Lacey will appear in court on Wednesday for a no contact order for the child.

Children exposed to meth can have serious health problems including brain lesions, respiratory issues and developmental disorders.  Lacey allegedly told police she has been using the drug off and on for the last six years.

Now CPS has custody of her baby, while she and Leslie face criminal child endangerment and criminal mistreatment charges.  CPS told us they have had one prior contact with Lacey, but would not elaborate on the nature of it.

Lacey and Leslie both have criminal records.  She was charged in 2010 with assault.  Leslie served prison time for multiple charges, including stealing cars and possession of a controlled substance.  In this matter, they are also both charged with having an incestuous relationship with one another.  Both are being held at the Snohomish County Jail on $150,000 bail.