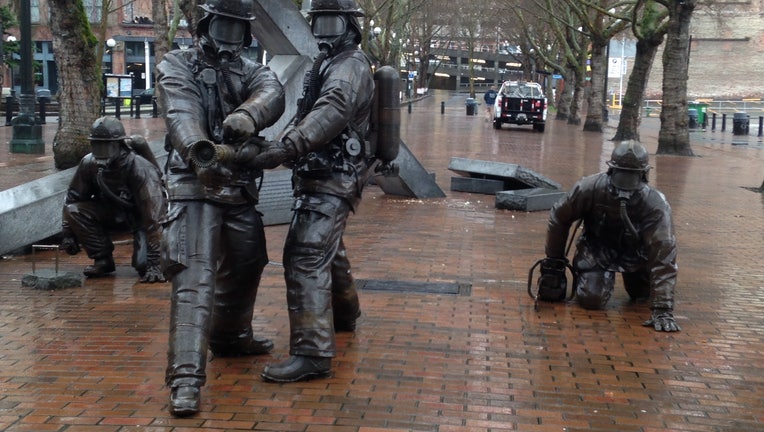 SEATTLE — Two Seattle firefighters and a female companion will not be charged by King County Prosecutors after being arrested in March in connection with brutal and unprovoked attacks on two homeless men.

Dan Donahoe with the Prosecutor’s office said the case had been reviewed and that they had concluded there was not enough evidence to prove felony assault.

“We also do not have a provision under state law that allows us to file a malicious harassment charge regarding an alleged victim being targeted based on being homeless,” wrote Donahoe.  “As a result, we are referring the matter to the Seattle City Attorney’s Office for the possible filing of misdemeanor charges.”

According to the Seattle Police Department, two firefighters — Scott Bullene and Robert Howell — along with civilian Mia Jarvinen were accused of assaulting two homeless men in Pioneer Square following a Sounders game. The assault was witnessed by many people, and ended with a self-defense stabbing that sent one of the firefighters to the hospital.

The odd string of events followedthe March Sounders FC match. According to court documents, Bullene, Howell and a Jarvinen were walking from CenturyLink Stadium to McCoy’s Firehouse near the intersection of South Washington Street and 2nd Avenue when they spotted a homeless man sleeping under the Seattle Fallen Firefighter’s Memorial statue in Pioneer Square.

Witness Alvin Taniferro told Q13 FOX Howell and Jarvinen didn’t like the man’s “disrespect” of the monument, and that they became enraged he was sleeping beneath it.

“(Howell) said to me that he had a brother that died on duty that was a firemen and he didn’t appreciate the homeless sitting on these monuments,” Taniferro said.

Witnesses said the first victim didn’t try to fight back, and only tried to roll away from the three suspects.

Once witnesses intervened, Howell, Bullene and Jarvinen went to McCoy’s Firehouse for a short time. But the three soon returned to Pioneer square and Bullene, who has previously been arrested for road rage and discharging a firearm in public, attacked another homeless man. Witnesses said he grabbed the homeless man’s large walking stick and — unprovoked — hit the man hard in the head.

The homeless man used his arm to defend himself against the stick and pulled out a small folding knife as Bullene prepared to strike again. He then stabbed Bullene in the stomach.

Police called to the scene first contacted Howell, who allegedly lied and said it was the homeless men who attacked his group. However, after multiple witness statements, Bullene, Howell and Jarvinen were arrested for suspected assault. Bullene was taken to the hospital and underwent surgery for minor stab wounds.

All three were intoxicated at the time of the attack, police said.