WASHINGTON (AP) — On a day when COVID-19 cases soared, healthcare supplies were scarce and an anguished doctor warned he was being sent to war without bullets, a cargo plane landed at the Los Angeles International Airport, supposedly loaded with the ammo doctors and nurses were begging for: some of the first N95 medical masks to reach the U.S. in almost six weeks.

Already healthcare workers who lacked the crucial protection had caught COVID-19 after treating patients infected with the highly contagious new coronavirus. That very day an emergency room doctor who earlier texted a friend that he felt unsafe without protective supplies or an N95 mask, died of the infection. It was the first such death reported in the U.S., according to the American College of Emergency Physicians. 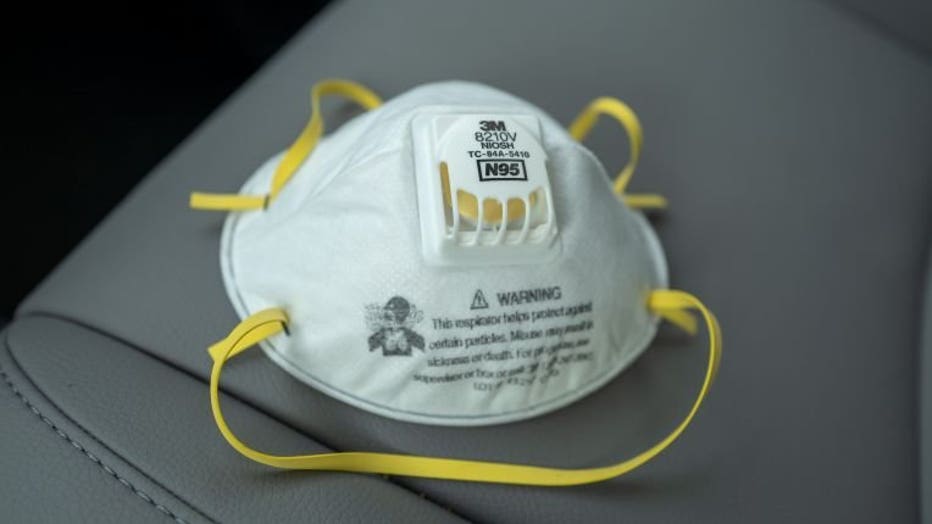 Before the pandemic, federal trade law enforcement agencies were focused on busting knockoffs such as luxury goods and computer software, mostly from China. As America fell sick, the mission shifted to medical supplies. To date, Operation Stolen Promise, spearheaded by Immigration and Customs Enforcement’s Homeland Security Investigations, has netted 11 arrests and 519 seizures. And yet counterfeit goods continue to pour in — not just masks, but also mislabeled medicines, and fake COVID-19 tests and cures, according to the agency.

“It’s just unprecedented,” said Steve Francis, HSI’s assistant director for global trade investigations. “These are really bad times for people who are out there trying to do the right thing and be helpful, and they end up being exploited.”

The story of how one brand of counterfeits has infiltrated America’s supply chains illustrates how the lack of coordination amid massive shortages has plunged the country’s medical system into chaos.

AP identified the counterfeit masks when reviewing film of the Los Angeles shipment. The telltale sign: these masks had ear loops, while authentic ones have bands that stretch across the back of the head, making for a tighter fit.

The blue and yellow boxes being unloaded in a Southern California warehouse bore the name of the Chinese factory Shanghai Dasheng. The masks inside were stamped as if approved by the U.S. National Institute for Occupational Safety and Health — signifying they had been certified by the U.S. government as safe for workers in health care settings. N95 masks filter out 95% of all airborne particles, including ones too tiny to be blocked by looser fitting surgical masks.

But the day before they arrived, the U.S. Centers for Disease Control and Prevention issued a very specific warning: all Shanghai Dasheng N95 masks with ear loops were counterfeit.

Ear loop masks are less expensive to manufacture because the straps are attached with glue to the face covering, while headbands on genuine N95s, also called respirators, must be stitched, stapled or soldered to establish a tighter seal over the nose and mouth.

And even if the electrocharged fibers in the fabric are the same, masks with ear loops are not as effective because tiny airborne droplets carrying the virus can get sucked through the cracks.

“Fluid follows the path of least resistance: If someone is breathing and the respirator doesn’t have a good fit, it will just go around,” said infectious disease expert Shawn Gibbs, the dean of Texas A&M University’s school of public health.

The company did not respond to AP’s queries about its masks. And AP could not independently verify if they are making their own counterfeits, or, as the CDC said in a published warning, someone is using Shanghai Dasheng’s certification numbers “without their permission.”

The CDC separately told AP it has been in talks with Shanghai Dasheng about authenticity issues.

“Recently, NIOSH has received reports stating there is product being obtained directly from the Shanghai Dasheng factory, labeled as NIOSH-approved, with ear loops,” said agency spokeswoman Katie Shahan in an email to the AP. Shahan said Shanghai Dasheng’s N95s with ear loops are counterfeit.

On their own website, Shanghai Dasheng warns: “WE DON’T HAVE ANY DISTRIBUTORS, DEALERS OR BRANCH FACTORIES. BEWARE OF COUNTERFEIT!”

Florida-based importer Mark Kwoka said he believes the Shanghai Dasheng masks with ear loops that he obtained came from their factory, based on information he received from his partners in China.

“This is kind of getting out of control,” said Kwoka, who made a career in bridal gown design and manufacturing in China but turned to masks earlier this year.

On a recent spring day, hawkers outside the guarded gates of the factory were offering to take orders for U.S.-approved, medical-grade N95s. It wasn’t clear whether the sellers were getting their products from inside. A security guard told a reporter that he believed the sellers were peddling counterfeits, but police at a nearby station weren’t able to confirm that. The security guard ordered the journalists to leave.

Shanghai Dasheng is one of the largest manufacturers of authentic N95s in the world and one of only a handful in China certified to make NIOSH approved, U.S. medical-grade N95s.

In normal times, Shanghai Dasheng was the gold standard for N95s, according to several brokers who work in China. But in the rush of this pandemic, several said cheaper masks are proliferating.

Meanwhile, Shanghai Dasheng is holding itself up as a vital part of the pandemic response.

Just days into a weeklong New Year celebration in January, company chairman Wu Shengrong called back employees and then joined cleaners, cooks and a skeleton crew of workers for long days and nights on assembly lines. Eleven days into the manufacturing blitz, Shengrong invited in a group of journalists and said his company had bumped daily mask production from 40,000 to 70,000, and aimed for 200,000 once back at full strength.

“I am not a learned man,” Shengrong said at the time, “but as a Communist Party member and army veteran, I am a patriot and Dasheng is just a drop of water in China’s ocean of private enterprises.”

One recipient of the Shanghai Dasheng ear loop masks was Direct Relief, an international humanitarian aid organization in Southern California.

Like other buyers AP contacted, Direct Relief at first thought the factory inadvertently sent the wrong mask model and set aside the entire shipment. But after reading the CDC’s warnings, CEO Thomas Tighe said they had come to believe they were counterfeit and reported them to the federal government.

Direct Relief has since caught even more poorly constructed masks donated to their warehouse.

Even for those looking out for fakes, it has been difficult to keep up with changing federal guidelines for medical-grade masks.

Citing an acute shortage of N95 masks, government officials relaxed standards in March. The U.S. Food and Drug Administration announced that other, unapproved medical masks with ear loops were appropriate for COVID-19 care.

But government testing of newly arrived models found most were substandard, and on May 7 the agency banned mask imports from 65 Chinese factories.

Shanghai Dasheng is among 14 that remain on the approved list.

For more than four weeks, millions of masks now considered inadequate for medical protection entered the U.S. and are now in use.

Meanwhile state and local governments, hospitals, private caregivers and well-wishers have spent hundreds of millions of dollars on the flawed masks. Before the pandemic, N95 masks sold for about 60 cents each. Today they’re priced as high as $6 apiece.

He said Lawrence General Hospital, which had solicited mask donations online, handed out ear loop Shanghai Dasheng-labeled masks to as many as 40 nurses in a COVID-19 unit before someone noticed.

In West Virginia, the state passed the masks to thousands of paramedics and firefighters, prison guards and hospital workers. State officials knew of the CDC warnings about Shanghai Dasheng’s ear loops, but dismissed concerns saying that, with a proper fit, they would be safe.

In a letter to first responders, Jeff Sandy, the state’s secretary for Military Affairs and Public Safety, said he reviewed the packaging and the masks, checked with the vendor, the importer, the Chinese exporter and — through a lawyer — Shanghai Dasheng itself. He wrote he is certain the 50,000 N95 masks with ear loops that the state provided are “genuine products” that provide adequate protection.

“While trusting the equipment to protect them, our members may have unknowingly placed themselves in situations that put them at further risk,” said West Virginia State Firemen’s Association President Jerry Loudin.

Some of the masks were purchased by charities or well-intentioned community members who held online fundraisers.

One Southern California marketing consultant, frustrated with reports that frontline medical workers didn’t have N95 masks, had a client who makes custom, re-keyable locks in China. That client said he had sources who could get legitimate N95s, and so she launched a fundraiser, and within weeks delivered a shipment of the Shanghai Dasheng ear loop masks to caregivers.

The consultant, Wendy Chou Le, said the nurses she gave them to near Los Angeles have been grateful and didn’t raise concerns.

Tyler Alvare, a pediatric physician’s assistant in Alexandria, Virginia, had run his own fit tests on the masks when they arrived. But after talking to the AP and reviewing the federal warnings, he said he grabbed all the Shanghai Dasheng ear loop masks he had left and notified everyone he gave them to.

He said the government should have taken responsibility for providing enough protective equipment as soon as the shortage of masks became apparent instead of having every medical provider figure it out themselves.

“It’s really outside of our area of expertise,” he said.

But even experts were caught off guard.

Franco Sagliocca, Mount Sinai procurement director, was working 18-hour days, seven days a week, to keep enough safety supplies in the hospital system’s ERs and ICUS as COVID-19 overwhelmed New York. He was searching, ordering and hustling for N95s, and was planning to buy from Shanghai Dasheng.

“Our sourcing lead said, ‘Wait a minute guys, this is something we don’t want,’” Sagliocca said.