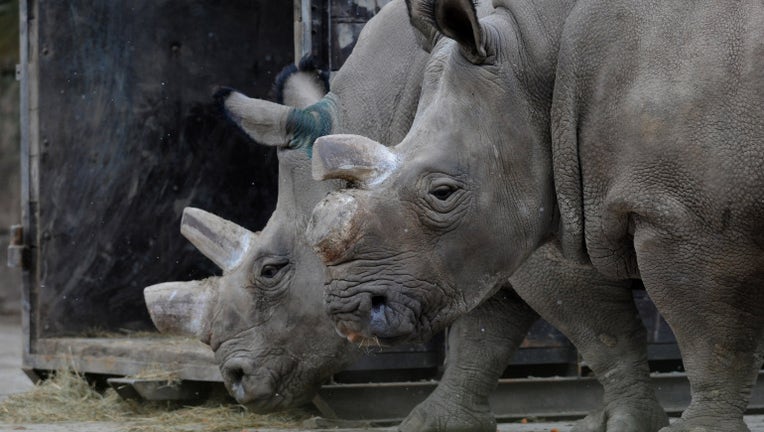 KENYA -- Unique? Suni was much more than that. He was vital to the survival of his kind.

So, on Friday, after rangers found the northern white rhino lifeless in his hut on a Kenyan wildlife conservancy, a short countdown to extinction began.

Suni was one of only seven northern whites left in the world, all of which live in captivity. There are none known to be left in the wild.

More importantly, Suni was one of only two breeding males left, said the Ol Pejeta Conservancy in a statement.

Now the conservationists have but one male and two females that can breed. And that doesn't happen often. When Suni mated with female Najin in April 2012, it was her first time in ten years.

A month passed before they mated again. So far, no offspring.

But Ol Pejeta conservationists say they will persevere "in the hope that our efforts will one day result in the successful birth of a northern white rhino calf."

If not, the end is nigh for the northern white rhino, which is a subspecies.

There is a related subspecies call the southern white rhino. It, too, was nearly extinct, but conservation efforts have raise its numbers to 20,000, the World Wildlife Fund said.

Suni was 34 years old when he died, and Ol Pejeta felt obliged to say that he wasn't poached for his horns.

That's what got most of the thousands of his ancestors, which once roamed northern African savannahs, the WWF said.

Ol Pejeta called that "a sorry testament to the greed of the human race."