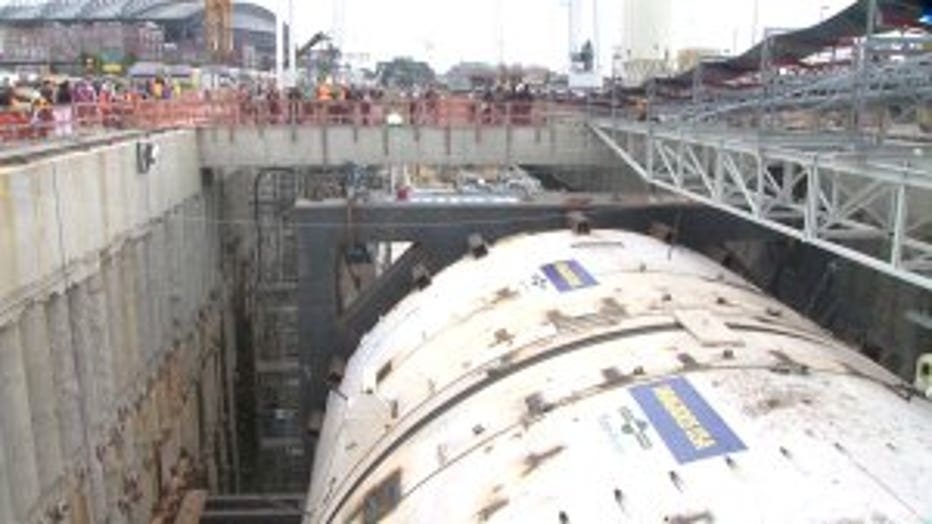 SEATTLE -- Bertha, the tunnel machine that's boring the new Highway 99, is still paralyzed beneath downtown Seattle. Transportation officials are working to find out what is blocking her path and they are formulating a plan to deal with it.

Bertha has been stalled for five days now. Best case scenario: it could take another two weeks to find out what is in Bertha’s way.

They expected obstacles along the way but didn't anticipate bumping into one 60 feet below the surface between South Jackson and South Main Streets.

Getting a closer look of the blocking object is a problem. Digging workers may need a hyperbaric chamber due to the pressure difference between ground level and where Bertha is digging.

“We are still analyzing the pros and cons, it's a pressurized environment,” Dixon said.

Once underground, crews will be able to determine if something is actually blocking Bertha's path or whether her cutter head is jammed.

“There are thousands of guesses floating around but until we get down there and see what the actual situation it is just speculation,” Dixon said.

Contractors say because Bertha is stuck in native soil, they don't believe the object is man-made.

“We are not expecting to find artifacts or railroad locomotives or ships or something like that down there,” Dixon said.

In the meantime the Washington State Department of Transportation is forced to play the waiting game.

As they weigh their best options, incoming Seattle Mayor Ed Murray is hopeful Bertha will be back to work soon.

“I believe the project can be delivered on time and under budget or at least on budget,” Murray said.

Some nearby business owners say they are still behind the landmark project.

“It is a shame that it is holding things up but I think they will get around it,” Pioneer Pet Feed & Supply owner David Bovard said.

They have brought in cranes and giant drills in preparation but so far the digging has not begun.