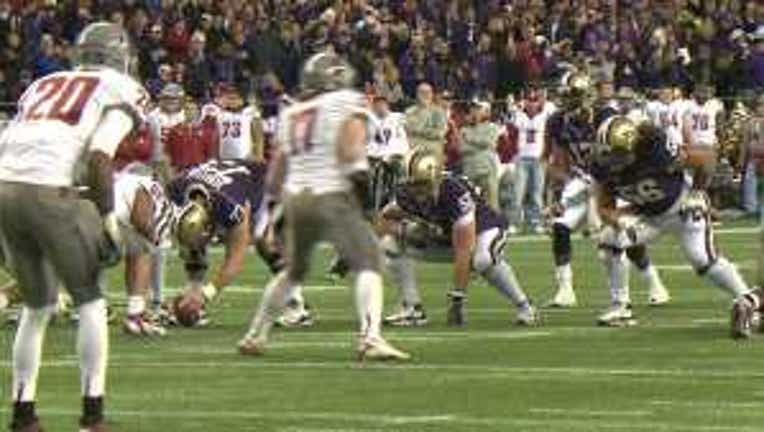 PULLMAN -- The Washington State Cougars overcame an 18-point deficit and kicked a 27-yard field goal in overtime to upset the Washington Huskies in the Apple Cup Friday.

The Huskies, now 7-5, had been favored by two touchdowns over the Cougars, which had only two wins this season entering the game. The Cougs are now 3-9.

UW had led by 18 points -- 28-10 -- after the third quarter.  But in the fourth quarter, WSU running back Carl Winston scored on two rushing touchdowns and the Cougs added a two-point conversion and kicked a field goal to tie the game at 28-28.

The Huskies had a chance to win the game with only seconds left in the fourth quarter, but kicker Travis Coons missed a 35-yard field goal attempt, sending the game into overtime.

Washington quarterback Keith Price then threw an interception on the first play of overtime that WSU defensive lineman Kalafitoni Pole snatched in UW territory.  The Cougs were able to pick up a first down to get closer to the goal line, and then kicker Andrew Furney kicked the 27-yard game-winning field goal.

Elated WSU fans decked out in crimson and gray ran out of the stands and onto the field in celebration.