KUALA LUMPUR, Malaysia (AP) - Malaysia’s Top Glove Corp., the world’s largest maker of rubber gloves, said Tuesday it expects a two-to-four-week delay in deliveries after more than 2,000 workers at its factories were infected by the coronavirus, raising the possibility of supply disruptions during the pandemic.

Top Glove said it has temporarily stopped production at 16 factories in Klang, a town outside Kuala Lumpur, since Nov. 17 to screen workers, with its remaining 12 facilities in the area operating at much reduced capacities.

The government on Monday ordered 28 Top Glove factories in Klang to shut down in stages to allow workers to undergo screening and mandatory quarantine after 2,453 factory workers tested positive for COVID-19.

The health ministry reported 1,511 more cases in the area on Tuesday, but didn't say how many were factory workers. The cluster contributed to a record daily high of 2,188 cases nationwide, bringing Malaysia's total cases to 58,847. The cluster in the Klang area is currently the most active in the country with 4,036 cases. 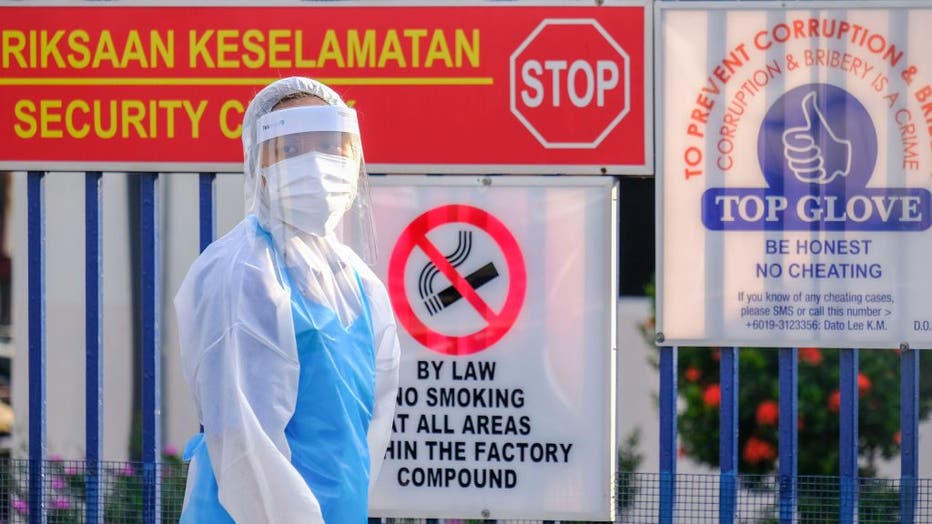 A volunteer wearing protective suit seen during a food distribution for Top Glove workers during the lockdown. (Photo by Faris Hadziq/SOPA Images/LightRocket via Getty Images)

Top Glove says it produces about 90 billion rubber gloves a year, about one quarter of the world's supply, and exports to 195 countries. It has seen profits soar amid rising demand for its products due to the pandemic.

“We expect delays in some deliveries by about two to four weeks, as well as a longer lead time for orders, and estimate a possible 3% impact on projected annual sales for financial year 2021," Top Glove said in a statement.

“To minimize the impact on our customers, we are allocating sales orders to unaffected factories and rescheduling deliveries where possible," it said, without elaborating.

It said it is working closely with the authorities and implementing stringent health measures, including daily disinfection of the workers' dormitories and its factories. Top Glove reportedly has about 13,000 workers at its 28 factories in Klang.

It employs a total of 21,000 workers in its 41 factories in Malaysia and six others in Thailand, Vietnam and China.