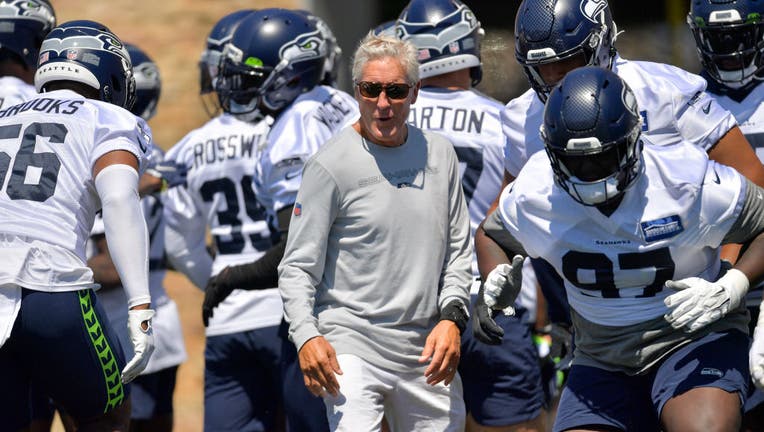 RENTON, Wash. - As a longtime defensive backs coach at heart, Pete Carroll always keeps a watchful eye on what’s happening in his secondary.

Especially this year, with some uncertainty about who the Seattle Seahawks’ starting cornerbacks will be when the regular season begins.

"The competition is really good. A variety of styles, sizes and shapes, and we’ll tailor our stuff to them. We’re not going to try to make them be something that they’re not," Carroll said. "Right now, it’s gathering information on the guys, that’s all. I have got my own study going, that I’ll keep on going throughout camp so I can stay abreast with how they’re developing, it’s really one of the things I have the most fun with."

In a training camp lacking many true position battles, who starts at cornerback for Seattle is one worth watching heading into the second preseason game Saturday against Denver.

There’s Ahkello Witherspoon, the free agent signing from San Francisco who looks the part of what Carroll wants at the position.

There’s Tre Flowers, now in his fourth season with the Seahawks, who at times has looked like a viable starter and at others has been woefully overwhelmed.

There’s D.J. Reed, who despite being undersized thrived last season when injuries to others gave him the chance to be a starter on the outside.

And there’s rookie Tre Brown, who is also undersized but craves the opportunity to prove he can play against bigger opponents.

Throw in veterans like Damarious Randall and Pierre Desir and it’s a deep group with the versatility for Seattle to play a variety of ways.

Witherspoon seems likely to be the starter on one side considering his experience and Seattle’s investment. Witherspoon signed a one-year, $4 million deal with Seattle after spending the past four seasons with San Francisco. He played in a system similar to what the Seahawks run during his time playing for the 49ers, and at 6-foot-2 has the size and athleticism Carroll craves at the position.

"The combination of size and foot quickness doesn’t really happen that often. I think just that also with .... my being able to see the game, I think those are my special attributes," Witherspoon said.

While it’s not set that Witherspoon will have the spot in Week 1, what happens on the opposite side seems the bigger question.

Reed is the incumbent after starting eight games, grabbing two interceptions and having seven passes defended last season. He’s outside the mold of what Seattle’s had at the position in the past at 5-foot-9, and thrived when he was given the chance.

But Reed has been slowed by injury during training camp and opened the chance for Flowers to reclaim a starting role. Flowers started 30 games his first two seasons, but his play was inconsistent and led to Seattle moving him out of the starting lineup last year before he suffered a hamstring injury and landed on injured reserve.

Flowers, a converted safety from college, is in the final year of his current deal with Seattle.

"The essential theme here is compete, so that’s what I do every day no matter who’s in front of me or behind me. It will bring the best out of me," Flowers said.

Brown is the wild card in the conversation, although it appears he’ll likely start off mostly as a special teams contributor. Like Reed, Brown is viewed as undersized at 5-foot-10.

The rookie from Oklahoma played nearly half the defensive snaps last week against Las Vegas and is likely in line for plenty more over the final two preseason games.

Brown said his first preseason experience was a lot different than expected.

"Maybe because it was preseason but I felt like it was kind of slow to me when I was out there," Brown said. "I was hoping to get targeted more. I wanted to make some plays on the ball. But I know I got to be patient and let the plays come to me, don’t go out there and look for those plays. But it was really exciting to be out there."