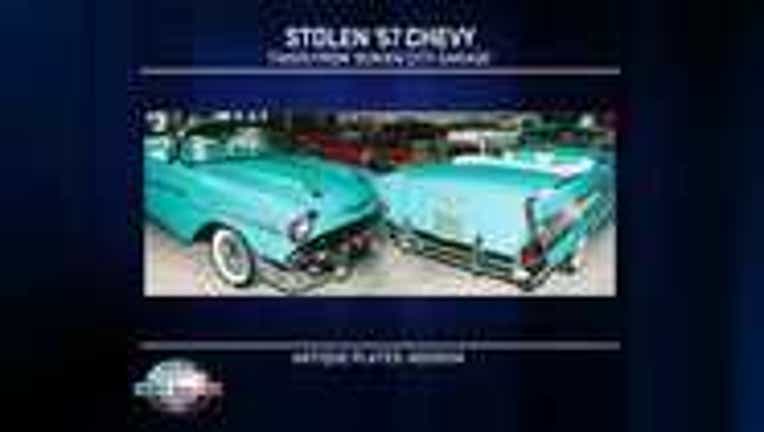 The King County Sheriff's Office says Burien detectives located the stolen turquoise 1957 Chevrolet Bel Air convertible vehicle last night, after serving a search warrant at a house in SeaTac. We featured the case, and talked with the heartbroken owner after it was stolen on September 23rd from a Burien auto shop. On Monday, October 29th, detectives received information that the suspect was attempting to trade the stolen car for another classic car that was for listed for sale in Colorado on the internet.  The suspect texted the man in Colorado, who had the classic Impala listed for sale, asking if he was interested in a trade. The Colorado man received a text picture of the stolen Bel Air and became suspicious because of the cars value.  The man searched the internet, and figured out it was stolen. He immediately called the Burien City Garage where the car was stolen from. The shop owner passed the information on to detectives who began an investigation into the matter. By Wednesday, detectives had enough information to obtain a search warrant to search a garage in the 17300 block of 33 Ave S in SeaTac. The search warrant was served around 7pm and detectives located the stolen car inside the garage. The car appeared to be in good condition. The suspect, a 33 year old Tuwila man, was arrested and booked into the King County Jail.  Click here to see video of the car's recovery taken by King County Sheriff's Office---ORIGINAL CASE 9/28/12--- A Burien man who put 18 years into restoring the beloved classic car he always wanted, is heartbroken that somebody stole it. Duane Quande owns ‘Burien City Garage’, and loves his classic Chevy, "You look down the body, there's not a ripple in the paint or the body. It is perfectly flat." But, Saturday morning, thieves stole his sweet, mint condition show-car -- a ‘57 turquoise Chevrolet Bel Air, with a Ragtop. "If they caught the people, they ought to cut their right hand off." Thousands of dollars and hours spent refurbishing it... rolled right out of his business on Ambaum Blvd. King County Sgt. Cindi West says turquoise isn't an unusual color for that make and year, so you may see others like it, but they want to know if you do. “if you see one, don't assume that somebody's already called us and checked it out. Give us the call and let us check it out for ourselves.” Duane’s classic car theft is just the latest beauty to be ripped off. Earlier this month, someone jacked a purple, 1970 Dodge Hemi Charger from a warehouse in Fife worth $100,000, and Sgt. West tells us there’s several things they could be doing with them, "One, they could just take it for a joyride and have a little bit of fun until they either get caught or dump the car. Or, if they're a little bit more sophisticated, they might attempt to change the VIN to try to sell it, or even ship it overseas to try to sell it someone who might be interested.” Duane doesn't care what they wanted with his ‘57 chevy - he just hopes to get it back and is offering a reward for its return. "I don't understand why people, especially today, feel they have the right to go into your private area and steal something not only as special as this, but anything that somebody owns. " That same weekend another ‘57 Chevy Bel Air was stolen from "Harvey Auto Service” in Shoreline. It’s red and has exhaust pipes running down each side. Detectives don't know if the two are linked. Duane's turquoise Bel Air has a restored license plate used on antique cars: 402553A. If you spot any of the recently ripped-off classic cars, or you know where they can be found, call an anonymous tip into: CRIME STOPPERS: 1-800-222-TIPS You must call the Crime Stoppers hotline with your tip to be eligible to receive the cash reward for information leading to a fugitive’s arrest. CLICK HERE for information on how to TEXT A TIP to Crime Stoppers