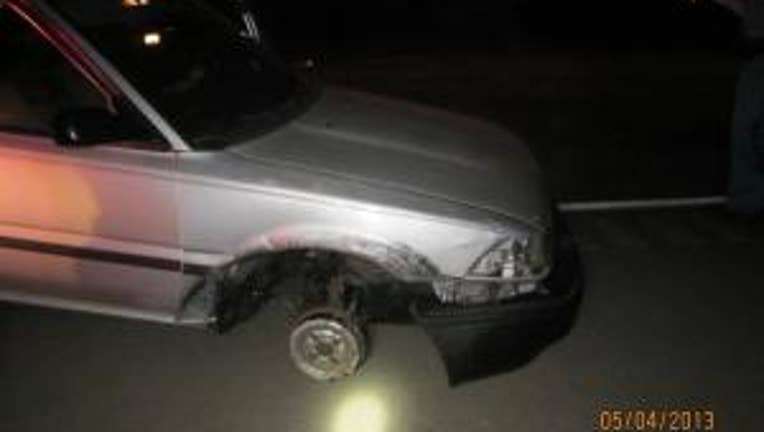 WOODLAND - A southwest Washington teenager stole his mother's car and then lead police on a high speed pursuit that reached 115 mph.  Woodland, Wash. police said that an officer tried to pull over a small passenger car that was weaving over the road early Saturday morning.  The officer, thinking that the driver may have been drunk, tried to stop the car on Schurman Way.  The driver of the car failed to stop and proceeded to drive onto northbound Interstate 5.  The driver, who turned out to be a 14-year old Woodland boy, drove recklessly north for about 26 miles.  Police clocked his car going up to 115 mph.  The car eventually drove over spike strips, causing both front tires to deflate.  The car continued on and police observed sparks coming from the front wheel rims.  Finally, the front wheels came off and the teen stopped the car, got out, and attempted to flee.  Police took the boy into custody, and told police that he stole the car out of boredom.  The boy admitted to having a few drinks and police arrested him for DUI and Attempting to Elude.  Police said that the boy also admitted to smoking marijuana, before stealing his mother's car.