Climate scientist Pierre Friedlingstein talks with FOX Television Stations' Chris Williams about his report that paints a grim picture for the earth if carbon emissions aren't reduced in 11 years.

GLASGOW, Scotland - Governments are poised to express "alarm and concern" about global warming already happening and encourage one another to end their use of coal, according to a draft released Wednesday of the final document expected at U.N. climate talks.

The early version of the document circulating at the talks in Glasgow, Scotland, also impresses on countries the need to cut carbon dioxide emissions by about half by 2030 even though pledges so far from governments don't add up to that frequently stated goal.

In a significant move, the draft urges countries to "accelerate the phasing out of coal and subsidies for fossil fuels," but makes no explicit reference to ending the use of oil and gas. There has been a big push among developed nations to shut down coal-fired power plants, which are a major source of heat-trapping gases, but it remains a critical and cheap source of electricity for countries like China and India.

The draft doesn’t yet include full agreements on the three major goals that the U.N. set going into the negotiations — to the disappointment of some observers. Those goals are the one on slashing emissions that is mentioned, requiring rich nations to give poorer ones $100 billion in climate aid and ensuring that half of that money goes to adapting to worsening global warming. 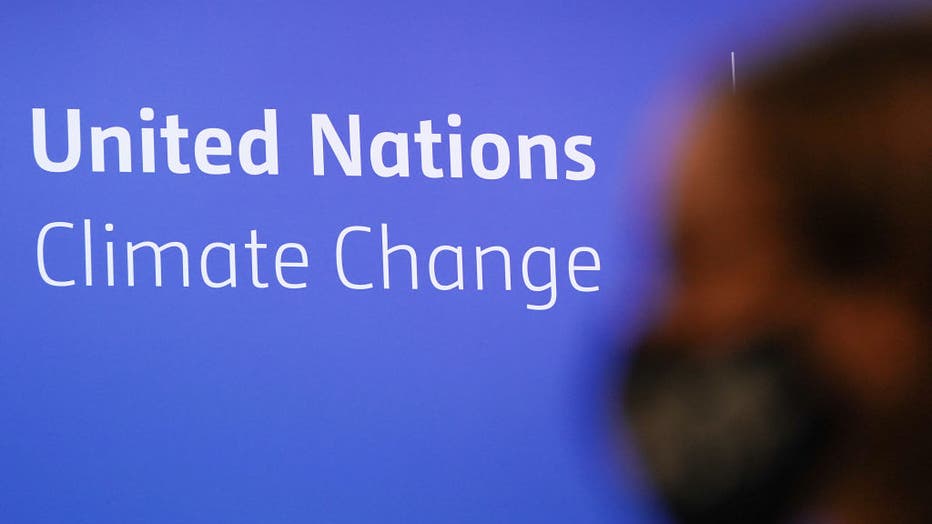 A general view of signage as delegates gather in a meeting room on day eleven of the COP26 at SECC on Nov. 10, 2021, in Glasgow, Scotland. (Photo by Ian Forsyth/Getty Images)

The draft does provide insight, however, into the issues that need to be resolved in the last few days of the conference, which is scheduled to end Friday but may push past that deadline. But a lot of negotiating and decision-making is yet to come since whatever emerges from the meetings has to be unanimously approved by nearly 200 nations attending.

The draft says the world should try to achieve "net-zero (emissions) around mid-century." Doing so requires countries to pump only as much greenhouse gas into the atmosphere as can be absorbed again through natural or artificial means.

It also acknowledges "with regret" that rich nations have failed to live up to the climate aid pledge.

Highlighting the challenge of meeting those goals, the document "expresses alarm and concern that human activities have caused around 1.1 C (2 F) of global warming to date and that impacts are already being felt in every region."

Separate draft proposals were also released on other issues being debated at the talks, including rules for international carbon markets and the frequency by which countries have to report on their efforts.

Queen Elizabeth II invoked her late husband, Prince Philip, in a video message Monday to world leaders gathered for the U.N. COP26 climate-change summit in Scotland. The Queen spoke along with Charles, Prince of Wales at COP26.

The draft calls on nations that don’t have national goals that would fit with the 1.5- or 2-degree limits to come back with stronger targets next year. Depending on how the language is interpreted, the provision could apply to most countries. Analysts at the World Resources Institute counted this element of the draft as a win for vulnerable countries.

"This is crucial language,’’ WRI International Climate Initiative Director David Waskow said Wednesday. "Countries really are expected and are on the hook to do something in that timeframe to adjust.’’

In a nod to one of the big issues for poorer countries, the draft vaguely "urges" developed nations to compensate developing countries for "loss and damage," a phrase that some rich nations don’t like.