REDMOND -- At this time of year, many try to express their cheer by using generic phrases such “Season's Greetings” or “Happy Holidays” -- but in Redmond someone is posting street signs encouraging people to use “Merry Christmas.”

Not everyone is happy about it.  The green signs with white print are posted in front of City Hall, the library, and near several schools.  They read “It’s OK to say Merry Christmas” with the Bible verse from Romans 1:16.  It reads, "For I am not ashamed of the gospel, because it is the power of God that brings salvation to everyone who believes: first to the Jew, then to the Gentile.” 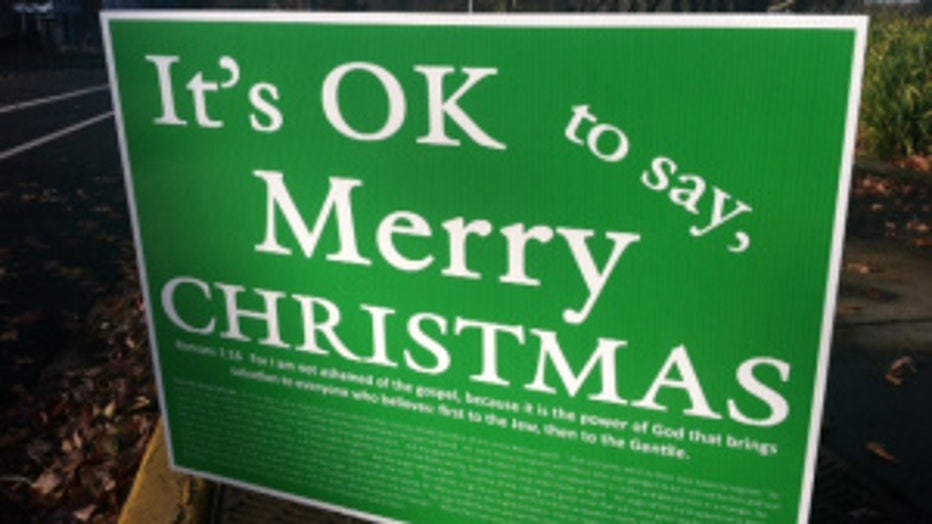 Some are offended by the scripture and the fact that they're placed on city property.  Mayor John Marchione says they are not city signs and reports this is the second year they have mysteriously popped up around town. But he also said he isn't going to take them down.

“The signs are placed in the city right-of-way," he said. "It’s available for free speech and this is a form of free speech like political signs and other signs.”

The city says a faith-based message or any other message is permitted to be displayed along city right-of-ways as long as they’re not discriminatory.  Most people Q13 FOX News talked to have no problem with them.

“There is a line between sharing your feelings and joy and belief and trying to convert people who aren’t interested, but I don’t feel this is pressuring anyone to be or do anything,” said Jen Baldwin.

So far, no religious group or church has taken ownership of the signs.