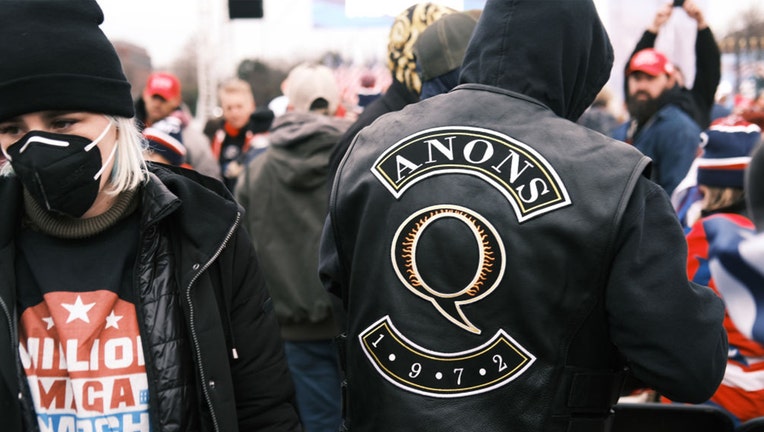 PORT ANGELES, Wash. - Last year, right wing conspiracy theories from QAnon were injected into the U.S. Presidential race. This year conspiratorial thinking is creeping into small town races around the country, including several on the northern Olympic Peninsula in Washington state.

A QAnon apologist named Donnie Hall recruits and trains candidates through a group he co-founded called the Independent Advisory Association.

"They’re what I call citizen candidates. They don’t have a lot of experience. We have to tell them the basics," Hall told KUOW.

But there’s more to Hall’s story.

The first candidate on his list was a local hair salon owner named William Armacost, who became mayor of Sequim last year, before he started to publicly promote QAnon conspiracy theories to the local community.

This year, Donnie Hall is backing a slate of candidates — a little over half a dozen — from Port Townsend to Port Angeles, a city Hall believes has moved too far left.

"A lot of times our city councils do not have contested races. A group of ideologues can step in and form a majority," he said.

For Hall’s Independent Advisory Association, that’s both a criticism of the status quo, and an implicit call to action.

The hot political issue in Port Angeles this year is homelessness, specifically a rumor that Seattle is buying homeless people bus tickets and shipping them out to the peninsula.

"There is now a fairly big controversy over how many of the homeless are homegrown, versus how many come because somebody buys them a bus ticket," Hall said.

There’s no evidence to support that theory. Nevertheless, it’s captured the imagination of many residents out here, including a small business owner and licensed massage therapist named Jena Stamper, who is one of Donnie Hall’s candidates this year.

She’s running for the Port Angeles City Council Position 3. Stamper wasn’t willing to be interviewed, but at a recent candidate forum, she embraced the conspiracy theory.

"They do come from other communities that say, ’Hey, we know Port Angeles has these services, and they can help you there," she said.

Attorney Lindsey Schromen-Wawrin, the incumbent in this race, said it’s "a myth" and "a big lie" to claim the rise in homelessness in Port Angeles is because "they’re coming from somewhere else."

But there are serious issues in this small community, with untreated mental illness and addiction, and both home prices and rents are skyrocketing.

Many in Port Angeles and the surrounding communities here are experiencing homelessness, like Alice Robbins and her husband. Two months ago they moved into Serenity House, which provides shelter and services for homeless people.

"We were in a house here in Port Angeles, and our landlord sold the house. So we had no place to go, so here we are here," she said.

"I’m noticing that even a studio is going for $1,000 easy. We’re both 63 …. my husband has pancreatic cancer, he’s got kidney disease, he’s got diabetes full blown."

These are details about a life story that some people in Port Angeles aren’t aware of.

"They’re really really rude about it. There’s an: ’If you’re homeless, you’re a tweaker. You’re on drugs, automatically. You know I mean? They’re really mean and I didn’t realize that until I became that myself," Robbins said.

Both said they do know some homeless people who have moved there recently, but most are from the area.

Tabitha Lomker has lived in Port Angeles for the last 11 years. Like many people on the Peninsula, Lomker lived in California before moving up north.

Sharon Maggard, who runs Serenity House, said the conspiracy theory — that most homeless people are being shipped in — is often the only thing people in town want to talk to her about.

Every Serenity house resident currently is from the area, she said.

There are some programs to help homeless people with travel expenses to get home to their families. King County has one. But for 2020, there’s no record of anyone using that program to go anywhere on the Olympic Peninsula. And this year’s homeless count in Port Angeles only recorded three people from outside the region.

"Strategy" behind the conspiracy

"We’re told that they’re coming because we have better social services here than where they were. So that prescribes a solution which is ‘Oh, get rid of the social services, and they’ll stop coming,’" he said

Defunding social services is part of what challenger Gina Stamper wants to do.

Schromen-Wawrin said that’s making policy based on a lie.

A third candidate in the race, Fogtown Coffee Bar owner Jason Thompson, said the city needs to provide more homeless shelters. On the issues though, he is much more conservative than Schromen-Wawrin.

"I feel that a great start is an absolute ban of encampments in downtown Port Angeles," he said.

But he rejects the conspiracy theory.

"I don’t believe that people are being bused in," Thompson said.

He also said he was approached by someone from Donnie Hall’s Independent Advisory Association to ask if he needed help with his campaign. But Thompson turned them down.

Experts say what’s happening in Port Angeles is also happening with Q believers and other conspiracy theorists all over the country — they’ve shifted from wild tales of Satan-worshipping pedophiles to more conventional conspiracies, like the one about Seattle shipping homeless people. And the persistent misinformation makes real issues that communities including Port Angeles face (recovery from the pandemic, addiction, mental health issues, and unaffordable housing) that much harder to address.