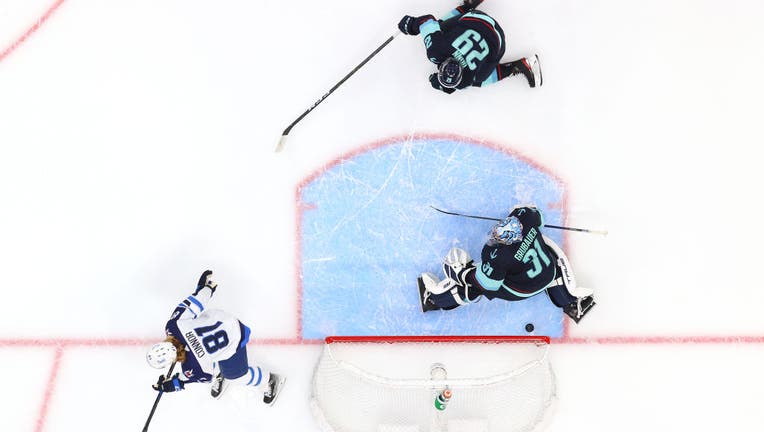 SEATTLE, WASHINGTON - DECEMBER 09: Philipp Grubauer #31 of the Seattle Kraken gives up a goal to Kyle Connor #81 of the Winnipeg Jets during the third period at Climate Pledge Arena on December 09, 2021 in Seattle, Washington. (Photo by Abbie Parr/NH

SEATTLE - Kyle Connor scored two goal in the third period and Connor Hellebuyck stopped 25 shots to lead the Winnipeg Jets to a 3-0 win over the Seattle Kraken on Thursday night.

Winnipeg’s first shutout of the season came after a team meeting during morning skate to address the Jets’ weak penalty kill. They stuffed all five power plays they faced in the win.

"We’re the worst PK in the league pretty much — we’ve got to take some pride in that," defenseman Brenden Dillon said. "I think our room, we’re prideful guys and we know we expect a lot better of ourselves. We know we’ve got to get better."

"I look forward to 26," Hellebuyck said with a sly smile.

The goalie credited Connor with turning the game late.

"He’s got so much skill," Hellebuyck said. "Tonight was the way that NHL games should look. You should grind a team out and then once plays are available, you make them, and he’s got the skill to make them clearly."

Dominic Toninato also scored for the Jets, winners in four of their last six games. Paul Stastny, Mark Scheifele and Logan Stanley had assists as the Kraken again faltered early.

Stastny gathered in a turnover by Carson Soucy behind the net and found Toninato at the point for a one-timer past Seattle goaltender Grubauer at 5:24 of the first period.

Grubauer, who was pulled after giving up three goals on four shots in Seattle’s 6-1 loss to Pittsburgh on Monday, allowed the goal on Winnipeg’s third shot of the game. But he finished the period with several tough saves, then traded athletic moves with Hellebuyck as neither team scored in the second period.

Grubauer stoned Nikolaj Ehlers on a breakaway midway through the second, then made another tough save after Ehlers gathered the puck and centered it to Logan Stanley. Grubauer shut down the chance with a glove save.

Hellebuyck countered with a sprawling save on a Jared McCann shot 30 seconds later. A few minutes later, Grubauer responded with a quick save on Josh Morrissey’s slap shot out of a faceoff.