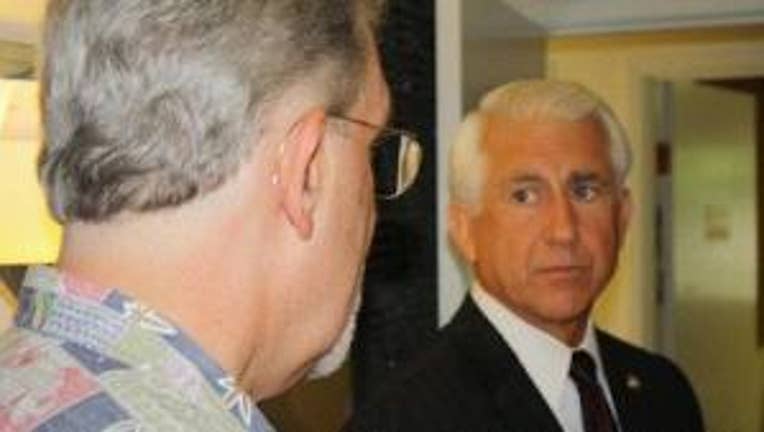 "Our office stands by the accuracy of the original New York Times article as it pertains to Rep. Reichert,” Reichert’s office said in a statement Monday. “We have no further comment about our involvement."

Meanwhile, the Wall Street Jounral reported that the same FBI agent is under investigation for allegedly becoming personally involved in the case and for allegedly sending shirtless photos to one of the people involved.

Reichert reportedly sent the FBI agent who told him about the probe to Cantor, and the House Republican leader told FBI Director Robert Mueller what he had heard.

“I was contacted by an FBI employee, concerned that sensitive, classified information may have been compromised and made certain Director Mueller was aware of these serious allegations and the potential risk to our national security,” Cantor said in a news release.

The Wall Street Journal reported Monday that the FBI agent who spoke to Reichert was barred from taking part in the case over the summer due to superiors' concerns that he had become personally involved in the case.

FBI officials declined to identify the agent, who is now under investigation by the Office of Professional Responsibility, the internal-affairs arm of the FBI, "two officials familiar with the matter" told the Wall Street Journal.

The newspaper said the FBI agent who started the case was a friend of Jill Kelley, the Tampa woman who received harassing, anonymous emails that led to the probe, according to officials. Ms. Kelley  complained in May about the emails to a friend who is an FBI agent. That agent referred it to a cyber crimes unit, which opened an investigation.

However, supervisors soon became concerned that the initial agent might have grown obsessed with the matter, and prohibited him from any role in the investigation, the officials told the Wall Street Journal.

The FBI officials found that he had sent shirtless pictures of himself to Ms. Kelley, according to the people familiar with the probe, the Journal said.

That same agent, after being barred from the case, contacted  Reichert, because he was concerned senior FBI officials were going to sweep the matter under the rug, the officials told the Wall Street Journal.

The scandal surrounding the decorated four-star Army general who once ran the wars in Iraq and Afghanistan involves questions of national security, politics and even the September 11 attack on the U.S. consulate in Benghazi, Libya, that left four Americans dead.

Petraeus, 60, resigned Friday after acknowledging he had an affair with a woman later identified as his biographer, Paula Broadwell, 40, a fellow West Point graduate who spent months studying the general's leadership of U.S. forces in Afghanistan.

Days after Petraeus' resignation stunned Washington, information continues to emerge. Among other things, a video has surfaced of a speech by Petraeus' paramour in which she suggested the Libya attack was targeting a secret prison at the Benghazi consulate annex, raising unverified concerns about possible security leaks.

The affair came to light during an FBI investigation of "jealous" e-mails reportedly sent by Broadwell to a woman named Jill Kelley, a government source familiar with the investigation told CNN on Monday.

Kelley, 37, and her husband Scott released a statement saying they have been friends with Petraeus and his family for more than five years and asked for privacy.

Although Kelley lives in Tampa, Florida, she's known as a member of Washington's social circuit, according to the government source. The source has not spoken to Kelley, but says friends describe her as feeling like she is an "innocent victim."

Petraeus has denied having an affair with anyone other than Broadwell, according to a friend of the former general who has spoken with him since news of the affair broke.

The scandal also is rumbling through the halls of Congress, where leaders in both parties are seeking answers about the FBI investigation and there's much speculation about the impact Petraeus' resignation will have into the inquiry into the Benghazi attack.

Petraeus was scheduled to testify on the attack and the government's reaction to it this week.

The New York Times also reported Sunday that investigators found classified documents on Broadwell's laptop computer. The newspaper cited investigators as saying Petraeus denied he had given them to her.

Retired Gen. James "Spider" Marks, for whom Broadwell once worked and who knows Petraeus, said he doubts security protocols were breached despite what seems an unlikely indiscretion on the part of Petraeus.

"There's almost zero percent chance that national security was compromised or at risk," he said Monday.

A senior U.S. intelligence official said an extramarital affair by a CIA officer is not automatically considered a security violation.

"It depends on the circumstances," the official said.

The official also said Broadwell did not have a security clearance from the CIA.

Another official said Broadwell, who is an officer in the Army reserve, did have some kind of security clearance and that there are no issues with Broadwell having unauthorized access to classified information.