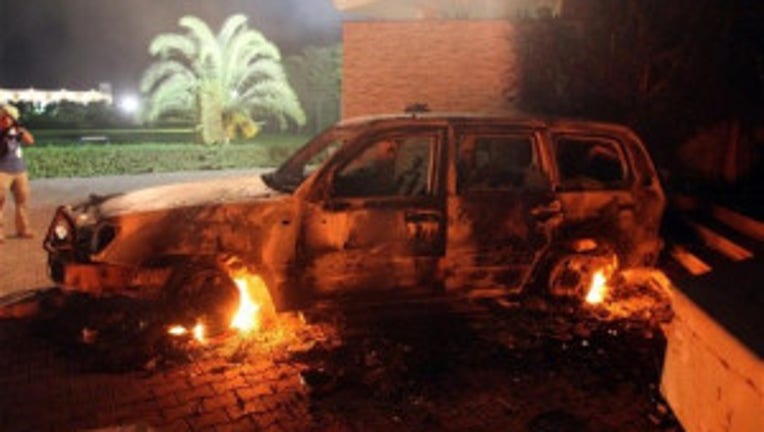 WASHINGTON -- Lawmakers on congressional intelligence committees got a detailed account Thursday of what happened during the attack on a U.S. diplomatic compound in Libya that left four Americans dead, including Ambassador Christopher Stevens.

In closed-door sessions, lawmakers got their most comprehensive account to date of what happened on the ground in Benghazi, Libya, on Sept. 11, a senior intelligence official told CNN. They also heard an explanation as to what U.S. officials were doing behind the scenes to respond, the official said, adding that the presentation would clarify some mischaracterizations about the nature of the attack.

A video that the legislators saw shows the attack and Stevens being dragged out of a building, a source familiar with the House Intelligence Committee told CNN. Sen. Dan Coats, R-Ind., said the footage was "a combination of video from a surveillance camera and a drone."

"It gave us a good picture, from the surveillance standpoint, what was happening," Coats said.

Rep. Adam Schiff, D-Calif., described the session as "the most constructive briefing" the committee has had on the matter to date.

Meanwhile, Republican members of the House Foreign Affairs committee, which convened a panel of experts not directly connected with the Benghazi attack, offered sharp criticism of the administration's handling of the matter, with one congressman calling the U.S. president a liar.

"What is clear is that this administration, including the president himself, has intentionally misinformed -- read that, lied -- to the American people in the aftermath of this tragedy," said Rep. Dana Rohrabacher, R-Calif. "The arrogance and dishonesty reflected in all of this is a little bit breathtaking."

In recent days, a chorus of leading Republicans -- including Arizona Sen. John McCain, the ranking member on the Armed Services committee; South Carolina Sen. Lindsey Graham, who also sits on that committee; and Rep. Peter King, chairman of the House Homeland Security Committee -- have stridently criticized the government's response to the Benghazi attack. Graham and McCain have vowed to block U.S. Ambassador to the United Nations Susan Rice if she is nominated for secretary of state because they disliked her characterization of the incidents.

The California Democrat said Rice got the same assessment that the violence in Benghazi began with "a spontaneous protest that evolved into something militant."

"So I would say for those that are claiming that the U.N. ambassador had some different information, they are either unfamiliar with the facts or willfully ignoring them," Schiff said.

But the source familiar with the same briefing that Schiff attended said one Republican House member "got into it" with acting CIA Director Michael Morrel and Director of National Intelligence James Clapper about Rice's comments, challenging why they weren't as strong as they should have been on if there was an extremist element involved.

The political drama unfolds against a backdrop of a sex scandal involving the head of the CIA and top commander in Afghanistan.

Petraeus is testifying, days after resigning as CIA chief, in part to clear up "a lot of misrepresentations of what he told Congress initially," a source who has spoken to him said.

The then-CIA director knew "almost immediately" after the Benghazi attack that members of Ansar al-Sharia, a loosely connected radical Islamist group, were responsible, said the source, who is directly familiar with Petraeus' analysis of the situation.

Video from the scene and multiple sources indicated the group was behind the attack, said the source. At the same time, a separate stream of intelligence, including about 20 distinct reports, also emerged indicating a brewing furor over an anti-Islamic video produced in the United States may have spurred the attack.

The CIA eventually disproved the reports that film-related protests had anything to do with the attack. But this didn't happen until after Petraeus' initial briefings to lawmakers, in which he discussed all the possibilities, the source said.