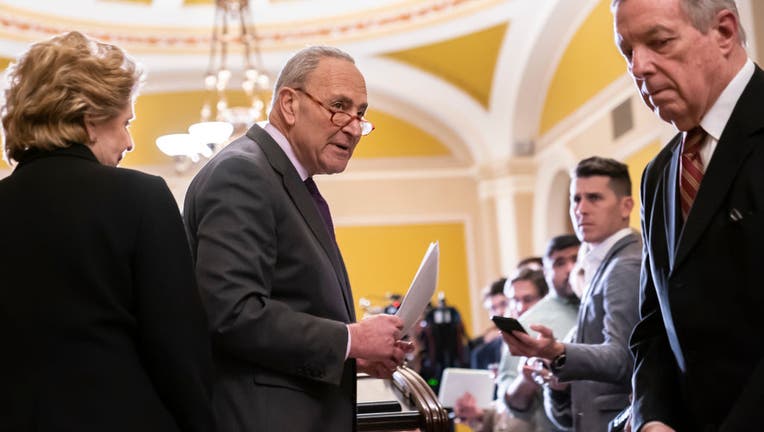 WASHINGTON - Lawmakers leading the negotiations on a bill to fund the federal government for the current fiscal year announced late Tuesday they've reached an agreement on a "framework" that should allow them to complete work on the bill over the next week and avoid a government shutdown.

Congress faces a midnight Friday deadline to pass a spending bill to prevent a partial government shutdown. The two chambers are expected to pass another short-term measure before then to keep the government running through Dec. 23, which will allow negotiators time to complete work on the full-year bill.

Earlier in the day, Senate leaders said lawmakers from the two parties were nearing an agreement, but Republicans warned Democrats that lawmakers would need to complete their work by Dec. 22 or they would only support a short-term extension into early next year. That would give House Republicans more leverage over what's in the legislation, since they will be in the majority then.

"We intend to be on the road going home on the 23rd. We intend not to be back here between Christmas and New Year’s, and if we can’t meet that deadline, we would be happy to pass a short-term (resolution) into early next year," said Sen. Mitch McConnell of Kentucky, the Republican leader in the Senate.

Another rate hike is expected to be announced Wednesday afternoon. LiveNOW from FOX's Josh Breslow spoke with Greg McBride at Bankrate.com to explain what the increase means for your wallet.

McConnell voiced confidence Republicans would be able to meet their priorities of increasing spending on defense without "having to pay a bonus above what President Biden asked for" on non-defense priorities. He said Democrats were willing to accept that because they had previously passed two bills on a party-line basis that allow for more government spending on various domestic priorities.

Sen. Richard Shelby, R-Ala., said last week that the two parties were about $25 billion apart in what is expected to be about a $1.65 trillion package, not including mandatory spending on programs such as Social Security and Medicare. However, Democrats in their statements did not indicate what topline spending number had been reached in the framework announced Tuesday.

RELATED: US inflation slowed to 7.1% over past 12 months