NEW YORK -- New York's coronavirus death toll topped 10,000 even as the lack of fresh hot spots in the U.S. or elsewhere in the world yielded a ray of optimism and fueled discussions Monday about how some places might begin to reopen.

The brunt of the disease has been felt most heavily in New York, Italy, France, Spain and the United Kingdom, but grim projections of a virus that would spread with equal ferocity to other corners of America and the world have not yet materialized after more than a month of measures meant to blunt its impact. Even so, the worldwide case count surpassed 2 million on Monday.

MAP: This is where there are confirmed coronavirus cases in the US and around the world

The death toll in populous states such as Florida and Pennsylvania was on par with some individual counties outside New York City. Houston, the nation’s fourth-largest city and a hub for immigrant communities and business travelers in the energy industry, has been largely spared compared to other parts of the U.S. As Colorado deaths surpassed 300 on Monday, Gov. Jared Polis compared that figure to New York's thousands and called it “a tragic indication of our success in Colorado.”

Officials around the world worried that halting quarantine and social-distancing measures could easily undo the hard-earned progress that those steps have achieved in slowing the spread.

Still, there were signs countries were looking in that direction. Spain permitted some workers to return to their jobs, while a hard-hit region of Italy loosened its lockdown restrictions. Governors on both coasts of the U.S. announced that they would join forces to come up with a coordinated reopening at some point, setting the stage for a potential conflict with President Donald Trump, who asserted that he is the ultimate decision-maker for determining how and when to reopen.

Trump continued those assertions during an afternoon White House briefing on Monday, pushing back against reporters' questions about whether the president or governors have the authority to ease the restrictions. He said his administration has "a very good relationship” with the governors, but “the federal government has absolute power” in that decision-making process if it chooses to exercise it.

U.S. Treasury Secretary Steven Mnuchin said at the briefing that he expects more than 80 million Americans will have tax rebates directly deposited into their bank accounts by Wednesday. Under the program, single filers will receive $1,200 and joint filers $2,400, though it phases out for higher incomes. The rebates are aimed at boosting the economy as the country responds to the coronavirus.

New York saw a few positive signs Monday even as it reached another bleak milestone. It marked the first time in a week that the daily toll dipped below 700. Almost 2,000 people were newly hospitalized with the virus Sunday, though once discharges and deaths are accounted for, the number of people hospitalized has flattened to just under 19,000.

“This virus is very good at what it does. It is a killer,” Gov. Andrew Cuomo said Monday.

RELATED: Are you washing your hands incorrectly? Proper technique is pivotal to preventing spread of coronavirus

In the U.S., about half of the more than 22,000 deaths reported are in the New York metropolitan area. Meanwhile, tracking maps maintained by Johns Hopkins University showed a dense patchwork of coronavirus cases along the Northeast corridor, as well as significant outbreaks corresponding to other major metropolitan areas — though nothing on the scale of what New York has endured.

Houston's 18 total deaths since the start of the outbreak make up a tiny fraction of the one-day toll in New York City, prompting Mayor Sylvester Turner to say the city was achieving its goal of slowing "the progression of this virus so that our health care delivery system would not be overwhelmed."

Dr. Sebastian Johnston, a professor of respiratory medicine at Imperial College London, said it appeared that COVID-19 had peaked in much of Europe, including France, Spain, Germany, Italy and the U.K. He was worried the virus might now start to take off in countries across Latin America, Africa and Southeast Asia. There's also concern about Russia. 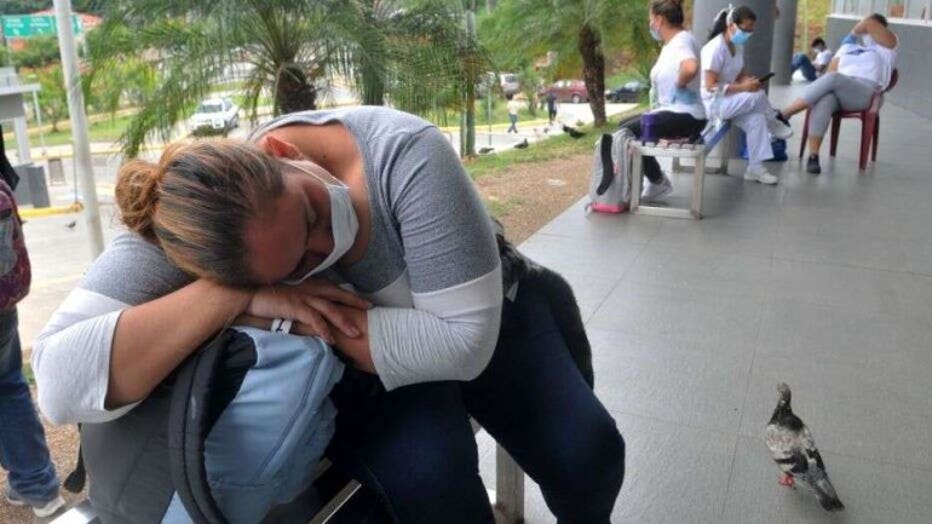 Relatives of patients being treated for COVID-19, wait for news of their loved ones at the IESS Hospital Los Ceibos in Guayaquil, Ecuador, on April 13, 2020 during the novel coronavirus pandemic. (Photo by JOSE SANCHEZ/AFP via Getty Images)

Hot spots may yet emerge as states lift stay-at-home orders, said Dr. Christopher Murray, director of the University of Washington institute that created widely cited projections of virus-related deaths. He pointed to states where the number of COVID-19 cases is still climbing: Massachusetts, Pennsylvania, Texas and Florida.

RELATED: Social distancing: What to do and what not to do to slow the spread of COVID-19

“Don’t consider relaxing social distancing in the near term,” Murray said he’d advise leaders in those states. “You need to stay the course.”

To date, some U.S. infections have taken off like sparks starting fires, while others have sputtered out. Trevor Bedford, whose lab at Seattle’s Fred Hutchinson Cancer Research Center has been tracking the pandemic using the virus’s genetic code, acknowledges it’s a “dice roll” that makes it hard to predict hot spots.

And when restrictions are eased, people will not immediately dive back into their social connections, at least not without precautions, Bedford said.

A study released Monday by the Centers for Disease Control and Prevention, relying on data from mobile devices in New Orleans, New York City, San Francisco and Seattle, suggested that social-distancing policies prompted more people to stay at home in March and might have curbed spread of the virus.

Researchers say people increasingly left their devices, and themselves, at home as cities, states and the federal government adopted increasingly restrictive closures and social distancing policies.

The report “provides some very early indications that these measures might help slow the spread of COVD-19,” the authors said.

In Washington, the Trump administration sought to delay deadlines for the 2020 census because of the outbreak, a move that would push back timetables for releasing data used to draw congressional and legislative districts.

The infection rate remains relatively low in areas of the developing world that have poor or nonexistent health care infrastructure. The rapid spread of the coronavirus beyond cities to more rural areas often depends on travel and social connections, said Dr. Mike Ryan, the World Health Organization's emergencies chief.

But he noted that rural areas often have less sophisticated health surveillance systems to pick up potential disease clusters, prompting the question, “Is it that it’s not there or is it that we’re not detecting the disease when it is there?”

In some European countries, officials pointed to positive signs as they began prepping for the reopening of largely shuttered economies and industries.

Italian authorities announced on Monday that there were 3,153 new coronavirus cases in the last 24 hours, approximately a 1.9 percent increase. That brings the country’s overall toll of known cases to nearly 160,000. The day-to-day death toll, 566, however, was up, from the 431 new deaths registered on Sunday.

Italy's day-to-day increase in infections was one of the lowest in weeks, bolstering a generally downward trend. Slightly eased restrictions were about to take effect in some sectors of the country, such as allowing stores selling necessities for newborns to reopen.

The hard-hit Veneto region, which has been credited with a rapid response to the virus that has helped limit the number of fatalities. is entering a phase the governor, Luca Zaia, termed ‘’lockdown light.’’

RELATED: Asymptomatic individuals may be rapidly spreading COVID-19, according to researchers

Zaia is allowing residents to go beyond 200 meters (219 yards) from home for physical fitness and permitting open-air markets, under a new ordinance taking effect Tuesday. The ordinance also makes masks or other face coverings mandatory everywhere outside the home.

In hard-hit Spain, workers were permitted to return to some factory and construction jobs as the government looked to restart manufacturing. Retail stores and services were still required to stay closed, and the government required office workers to keep working from home.

Health Minister Salvador Illa said Monday that he would proceed with “the utmost caution and prudence ... and always based on scientific evidence.”