The feds are now involved in investigations into two separate arsons Monday, one at the Seattle Police Department East Precinct and another at the Seattle police union building.

SEATTLE - Days after rioters climbed a chain-link fence, set a fire outside Seattle PD's East Precinct and tried to trap officers inside, the city is installing concrete barriers to protect the building.

A spokesman for the city said the barriers going up around the precinct are designed to prevent more attempted arsons and to protect residents who live nearby.

Activist Desmond David-Pitts is facing a federal arson charge for the fire, which was set outside the precinct while other demonstrators poured quick-drying cement on the precinct's doors - an effort to trap officers inside, investigators said.

The city spokesperson said the barriers will be similar to the ones recently installed at the city's West Precinct.

A separate arson on the same night targeted the Seattle Police Officers Guild building in SoDo. Two people are seen on surveillance video hurling three Molotov cocktails at the police union building on 4th Avenue South. The suspects are pictured in this photo: 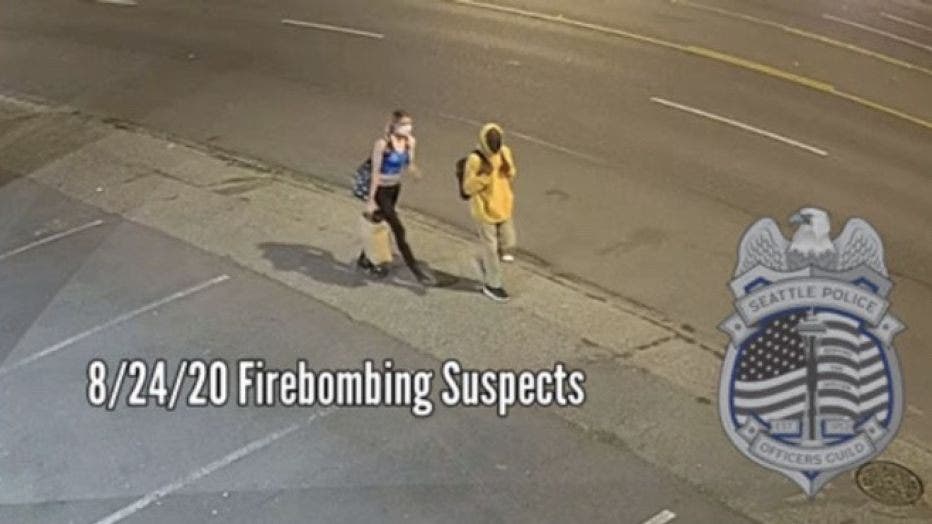 Anyone with information about the two arsons is asked to contact Crime Stoppers of Puget Sound. Send the info through the P3 Tips app on your smartphone or go to www.P3Tips.com.