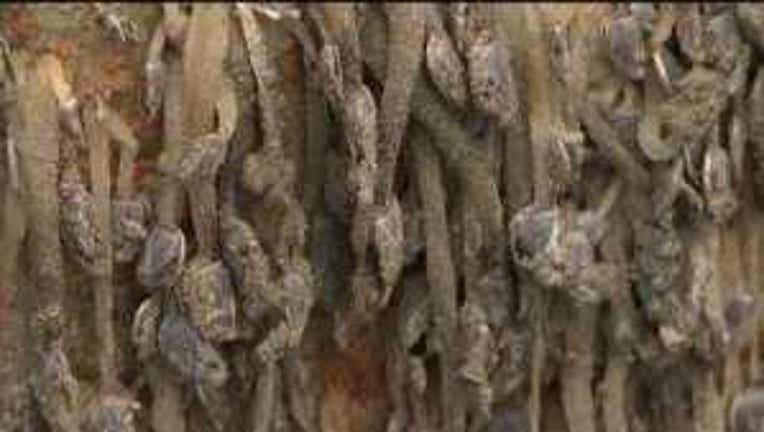 SEATTLE -- Concern is growing about potentially dangerous Japanese tsunami debris washing up on the Washington coast.

The massive earthquake in March 2011 that rocked Japan triggered a massive tsunami. More than 28,000 people were killed and entire towns wiped out.

Now some debris from that natural disaster is showing up in Alaska, Oregon and Washington and it's expected to get worse.

The big problem will be on the coast, and the amount expected to hit the coast and the problems it could cause is unimaginable.

First, there was that 160-foot Japanese fishing vessel – a ghost ship that had to be sunk before it reached land or came in contact with any other ship. Then came the Japanese fishing dock in Oregon.  It’s 7 feet tall, 19 feet wide and 66 feet long. And then there's the smaller items.

"You've seen all the Styrofoam that's been washing up; potentially it will be a thousand times more than that, so beaches might be several feet thick for many miles,” oceanographer Curtis Ebbesmeyer said.

He added that the bulk of the more than 1.5 million tons of tsunami debris is still months away and his biggest concern is Styrofoam.

"The birds like to eat it. It gets ground up into food and goes right into the food chain so if we don't get the Styrofoam off the beach real fast, it gets in the marine food web,” Ebbesmeyer said.

They were found on the fishing dock in Oregon and in the container that washed ashore in Alaska with a Harley Davidson motorcycle inside.

The invasive species could change our ocean waters forever.

The good news, according to Proskurowski, is that most of the debris will never make it ashore. Instead it will get caught up in the pacific subtropical gyre, a large system of rotating ocean currents.

"Some of it will get processed, especially the woody debris but a lot of the more persistent products will remain in the sub-tropical gyre for years and years to come and it's going to accumulate along with all the other plastic debris that's already located there,"  Proskurowski said.

Ebbesmeyer said states that will be heavily impacted by the debris are not ready to handle the cleanup. He expects the bulk of what’s coming ashore to get here within the next three years; then it could continue to come ashore in lesser amounts for the next 60 years.

Gov. Christine Gregoire plans to hold a news conference Monday on how the state will handle the debris.