A small South Sound community worries a proposed logging operation could leave a scar on the surrounding hillside and threaten a vital source of drinking water.

SUMMIT LAKE, Wash. - A small South Sound community worries a proposed logging operation could leave a scar on the surrounding hillside and threaten a vital source of drinking water.

Less than 1,000 homes dot the Summit Lake’s shoreline in rural Thurston County. Fifteen acres of woodlands managed by the state Department of Natural Resources is up for auction. Many neighbors worry environmental impacts could outweigh any public benefit.

Neighbor Tom Anderson has been an outspoken critic over the proposal. His family has lived on six acres for decades where they enjoy a view of Summit Lake from the front yard. They have seen hundreds of families move in since they arrived and he has a connection to this place.

"I don’t take that responsibility lightly," he said. "I think that it’s got soul."

That’s why he brought his concerns about the project straight to a State Department of Natural Resources board meeting in early March. He worries pollution from operations could flow downhill. He knows flooding is a concern, and how it could become worse if the trees are harvested. 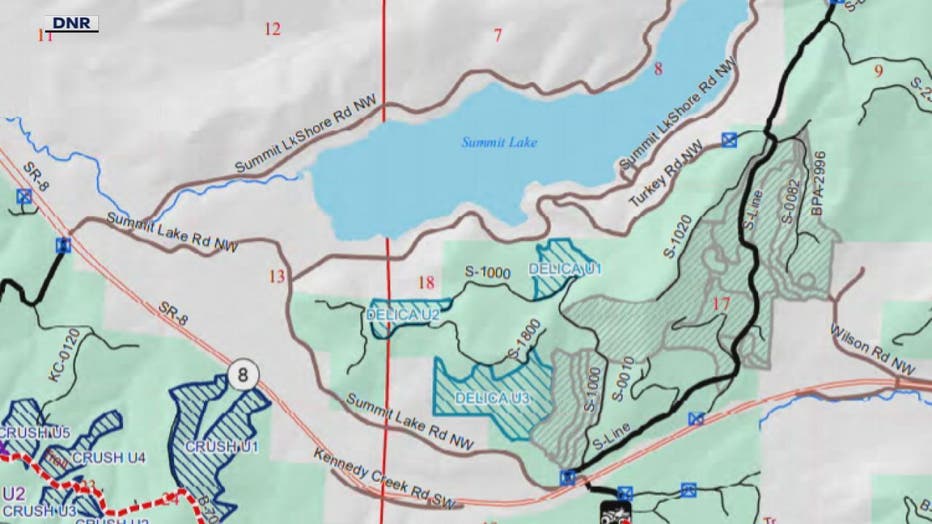 "We’ve had three events that could be construed as flood events in the past 15 years," he said.

"This lake was so good to me. I think it’s so worth fighting for," said neighbor JC Davis.

Davis is also concerned about the project. Through his work with Summit Lake Alliance, he says he has organized neighbors to join his opposition to the timber sale.

Many working locally in the forest industry laud DNR for responsibly managing public lands, which brings in millions of dollars and jobs that sustain communities and schools across Washington. Anderson worries the proposed cut in his backyard is the wrong way to steward what belongs to the rest of his community.

"Their intent is to put fast-growing alder in and not redwood or cedar or conifer," he said.

On Tuesday, a DNR spokesperson said red alder has been chosen because they seem to grow well.

The spokesperson also insisted water quality would not be threatened after a licensed engineer and qualified expert attest the harvest would operate under best practices, and flooding and geologic concerns present a low risk after roads and buffers will be designed to minimize impact.

Should the board approve the sale, harvest would not occur until autumn, said the spokesperson.