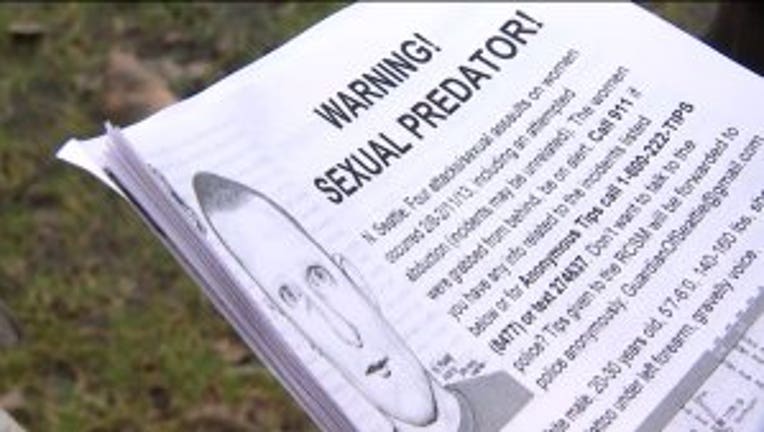 SEATTLE -- It's been more than a week since a woman was attacked and sexually assaulted on a trail near a popular shopping mall, the first in a rash of attacks on women in north Seattle police are hoping to solve.

The first of the four attacks happened near Northgate Mall on February 8th when a woman said a man pulled her off a trail and sexually assaulted her.

A day later, another woman said a man driving a white van tried to abduct her while walking in the Greenwood neighborhood. She was able to fight off the attacker.

The two most recent attacks happened near Green Lake -- a popular place for runners, walkers and cyclists.

Lindsey Gates went for her evening jog around Green Lake Saturday, something she now does with a friend in response to the attacks.

"To be honest it's a little creepy,” Gates said. “Especially if you have music in, you can't really hear anything and I feel like that's the last thing I want to worry about when I'm trying to exercise.”

The only strong lead police have is a sketch of the man suspected in the sexual assault near Northgate Mall.

Now the north Seattle community is getting help from two local crime fighters.

Armed with perseverance and flyers about these attacks, Purple Reign and Phoenix Jones are patrolling the neighborhood.

"We just wanted to get them out into the community’s hand,” Purple Reign said. “We want people to come and take these flyers and put them in their own neighborhood, just to raise more awareness about what's going on, keep people on alert.”

"I think it's helpful that flyers are out otherwise people wouldn't know who to look for,” a concerned resident said.

Others just want their favorite park back.

" is supposed to be a family park, not where crazy people like this do mean things,” another resident exclaimed.

Cops and caped crusaders have something in common; they both want to get the attacker off the streets before he can hurt anyone else.

"Wherever this guy is I hope he goes into hiding or gets caught or turns himself in,” said Jones. “I find sexual predators to be disgusting filth of the earth.”