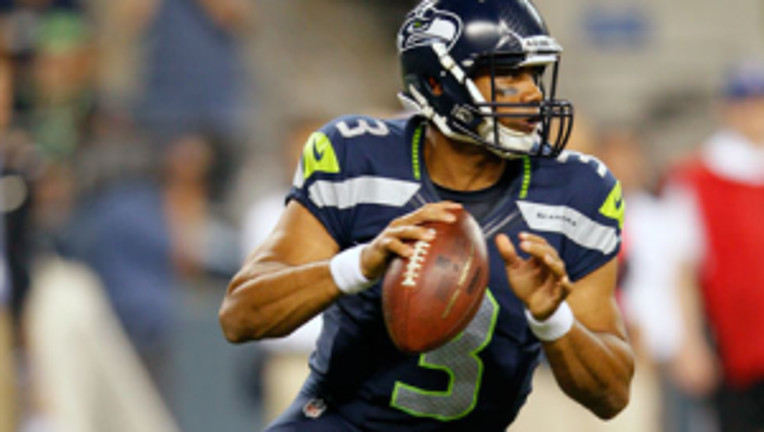 SEATTLE -- We start by putting our Bud Light spotlight on the NFL’s rookie of the year so far.

It’s my opinion that it’s neither the Redskin’s Robert Griffin III or the Colts’ Andrew Luck.  Instead, it’s the Seahawks’ Russell Wilson

Call me a homer , but I’m a homer with the numbers to back me up.

Fine, Wilson threw just 13 passes Sunday. But one of those was his 20th touchdown of the year, placing him fourth all-time for most passing scores by a rookie quarterback. He’s only six away from Peyton Manning’s rookie record of 26. Plus, he’s got more passing touchdowns than both Andrew Luck and Robert Griffin III.

We all know if Wilson was playing in New York, or Philadelphia or Dallas he’d be the front runner – or at the very least, in every conversation involving RG3 and Luck. Instead, he’s looking up at the top two picks from the draft. And it has nothing to do with height.

I understand Andrew Luck has impressive number s- and has the sympathetic vote. He’s rallied a team playing for a head coach battling cancer. Plus, the Colts weren't expected to be anywhere close to 9-and-4. And Luck’s six game-winning drives are the most by a rookie since the league’s merger in 1970.

I also understand that RG3 flashy, and at times an impressive, one-man show.

But we knew both were good at the start of the year.

And who expected a third-round draft pick to be as prolific – and efficient – as the Seahawks quarterback in his first season under center? It’s as impressive a story as you’ll find in the NFL.

Fortunately, this race has three more weeks. Like the Heisman Trophy, this award is all about publicity, exposure and momentum at the end of the year. Wilson and the Seahawks have three weeks left to prove he’s worthy. And I fully expect him to pass the test.

It almost reminds me of the playoffs. Just get in – and give yourself a chance to win it all. Just put Wilson in the discussion, and he’ll have a chance to win the award.

Finally, if it comes down to Luck or Wilson, let’s compare common opponents. The Seahawks and Colts have seven common opponents this season. Luck is 4-and-3. Wilson is 5-and-2. Luck wasn’t able to engineer a game-winning drive against one of the best defenses in Chicago. Russell Wilson was.

Being in Seattle might cloud my judgment. But if I’m not going to stand up for our guy, how can we expect the national pundits to take notice? Last week was just the start. The next three weeks will tell the story.

And I expect Wilson to hit a home run.