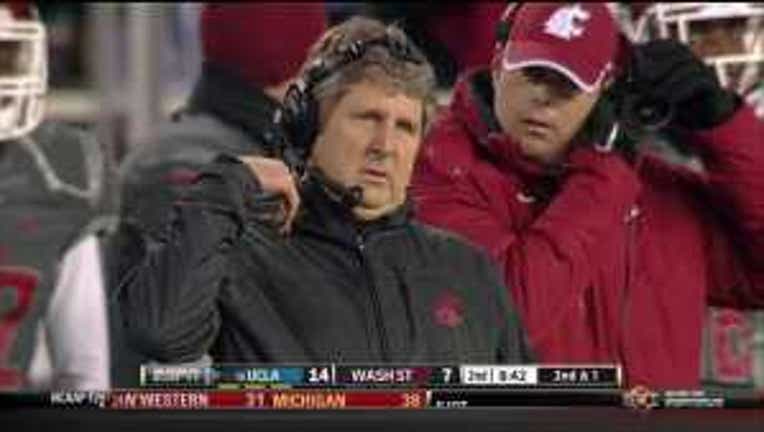 SEATTLE—
We start by putting our Bud Light Spotlight - again - on the Washington State Cougars.

University President Elson Floyd released a statement Sunday which said, "after consultation with athletic director Bill Moos, I have asked our athletic department to fully review recent allegations raised, concerning the football program and report their findings and conclusions as soon as possible. Simultaneously, I have asked the Pac-12 to independently do the same. Together, both reports should get to the bottom of the matter."

It refers to the school's all-time leading receiver, Marquis Wilson, who quit the team - citing physical, emotional and verbal abuse being allowed in the locker room and on the field.

Whether true or not, this is one huge headache - and one not curable by sitting alone in a dark shed. And while it's truly a shame - it's safe to say, something like this was inevitable.

Mike Leach might be the perfect choice to resurrect the Cougar football program. Only time will tell. But given his history, if you thought his tenure would be free and clear of controversy, you were sorely mistaken. Regardless of the facts, Leach made national news with his firing from Texas Tech for allegations of abusing a player. The microscope was going to be on him for the rest of his career.

Which means - whatever the real truth is with Wilson - these allegations couldn't be worse. And it paints a terribly negative light on Washington State.

The allegations alone will prompt critics to say "that's the same old Leach." it hurts recruiting. It hurts the school's reputation.

And for now at least, it prompts the questioning of the Leach hire.

I credit Athletic Director Bill Moos for doing his due diligence. I give him props for taking an educated risk. But I'm not sure he estimated how damaging similar allegations could be - especially when it came from one of the team's best players.

One of the reasons Leach said he fit so well at Washington State was because - in his words - there wasn't the bureaucratic turf war there. But Pullman isn't located in a vacuum. And all of a sudden, he finds himself in the middle of a bureaucratic turf war that he and his coaching staff have allegedly created. President Elson Floyd isn't merely giving the allegations lip service. They're taking them seriously - because as the leader, Floyd is ultimately accountable too.

Bill Moos wanted to hire someone that would put the program on the national radar. Unfortunately, less than one year in - he has - for all the wrong reasons.

Last week, I made the assessment, premature or not, that Leach was overpaid for what he's accomplished so far. But now it's a whole new world.

I hope Washington State eventually finds success. But the question we have to ask at this point will be - if the costs - financially and perception-wise - will outweigh the benefits. Right now, the answer is a big fat “No.”