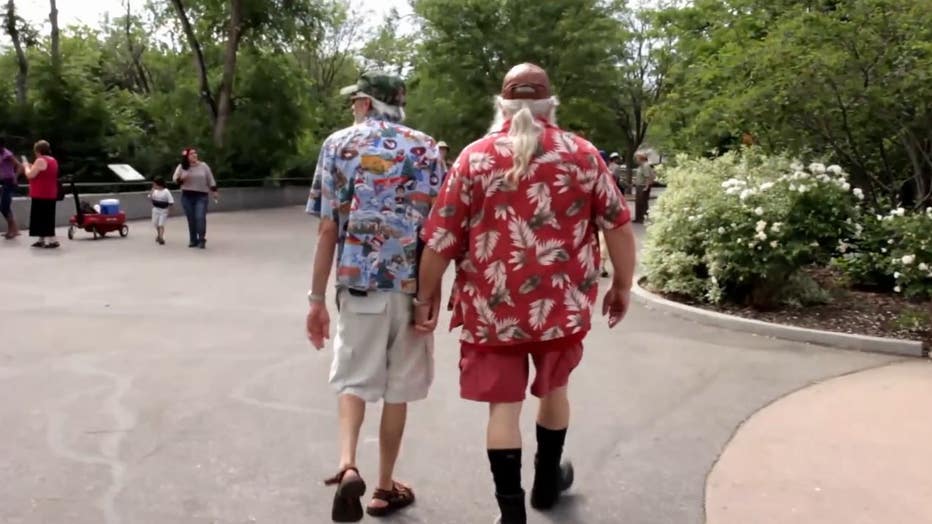 Editor's note: John D. Sutter is a columnist for CNN Opinion and creator of CNN's Change the List project. Follow him on Twitter, Facebook or Instagram. E-mail him at ctl@cnn.com. The opinions expressed in this commentary are solely those of the author.

That's the question at the heart of a new documentary, "I Am Santa Claus," which follows the lives of five Santa impersonators beyond the Christmas season.

In the literal sense, the answer the film provides is this: Santa is everyone who can supply the requisite beard and some Christmas cheer.

The Saint Nick stand-ins the filmmakers follow are poor and rich and drunk and fat and kind and gross and sad and sweet. One smells like cookies (it's cologne). One lives in a trailer park in central Michigan. One is a former pro wrestler who used to wear a leather mask and go by the name Mankind as he fake-pummeled Spandex-wearing men on national television.

Oh yeah, and one of them is gay.

Time for a sale on pitchforks at Hobby Lobby, right?

Maybe not. The anti-gay backlash to a gay Santa from Texas that you might have expected five years ago ("on his lap?") hasn't materialized, or hasn't much beyond what director Tommy Avallone calls the "Santa police," or Santa impersonators who want to maintain arbitrarily strict standards about what Santa can or can't be, on or off the sleigh.

Maybe that's because the documentary is buzzing below the national radar for now.

Maybe it's because it's getting harder to be openly homophobic in public.

Or maybe, hopefully, it's because this is Christmas season 2014. Black Friday sales are reportedly down 11%. Airstrikes are flying over Syria. But gay Santas are totally inoffensive.

And hallelujah for that.

No one (that I've seen) is busy conflating gay men with pedophiles. Few are questioning whether gay men should have a place in a highly commercialized, quasi-religious tradition. No one is rushing to fire Santa because of his sexual orientation.

All of those arguments seem so trite these days -- to the point of irrelevance.

Sure, there are some utterly homophobic comments to be found online about "I Am Santa Claus," which, full disclosure, was executive produced by Morgan Spurlock, who has a show on CNN. Just turn to the comments section of YouTube, the cesspool of digital humanity, and you'll find people with the true spirit of Christmas beaming through their fingers as they type sentences like, "So, Santa F** makes his film debut? How disgraceful! We, as a society, have become TOO accepting of immoral lifestyles."

And Mick Foley, the former pro wrestler who's one of the Santas in the documentary, told me he had to take a break from Santa message boards (yes, those exist) and Facebook because of what he perceived to be a homophobic backslash to the film. "Anyone who expressed shock or outrage -- and there were a lot of people expressing shock and outrage and deep concern -- were probably concerned about the revelation of a gay Santa and what that could mean to their community," he said.

But the documentary has a 3½-star rating (out of a possible 5) on Netflix. One reviewer, Iann Robinson from CraveOnline, writes that he "sat down to watch the movie as Scrooge, and eventually melted into Ebenezer." And search social media and you'll find stuff like this tweet: "Gay Santa from 'I am Santa Claus' is my new favourite person."

I'm heartened by that, and I have to agree.

Gay Santa's name is Jim Stevenson. He's in his 70s. From Texas. Beard: nipple-length. He loves being Santa because he doesn't have kids and it gives him a chance to contribute.

"I personally never have had a problem with a straight person about being gay and being Santa," he says in the film. "I've never been admonished for that. I've never been questioned. I've never -- it's just never come up."

The documentary shows Stevenson kissing his boyfriend on a merry-go-round, dealing antiques in a Texas store and posing for photos in his underwear (he does that, apparently). Another Santa who makes a brief appearance in the film is a swinger who goes to sex clubs. Yes, the idea of Santa having sex -- at all, with anyone -- is strange.

But does it disqualify him from spreading Christmas cheer?

(Reminder to all kids in the audience, these are stand-in, actor Santas. Not the real deal).

In one scene, two of the non-gay Santas consider the bounds of who should be an acceptable Santa impersonator. Those bounds, in my view, should include pretty much everyone who isn't a criminal -- anyone who isn't dangerous to children. Foley, the former pro wrestler, said essentially the same. "I believe we've had women posed as male Santas," he said. "I graduated Santa Claus school with a very good Jewish Santa. He points out ... who better to work on Christmas Day?"

In Germany, a beloved Santa was fired this week, according to NBC News, possibly because he is older than 70. There's already an online petition calling for his reinstatement.

I have a feeling the same would happen if a gay Santa were fired here in the United States -- even if most state laws wouldn't protect his right to not be fired because he's gay.

The most important Santa requirement, as outlined in the bylaws of the Fraternal Order of Real Bearded Santas (again, real), is that stand-in Santas "endeavor to foster a reverence for the Spirit of Christmas & respect for all children, without regard to race, creed or religious denomination."

Makes sense to me.

As does the required background check.

Disagree? It's time to get over it.