SEATTLE -- We start with our spotlight on Mariners CEO Howard Lincoln and President Chuck Armstrong. 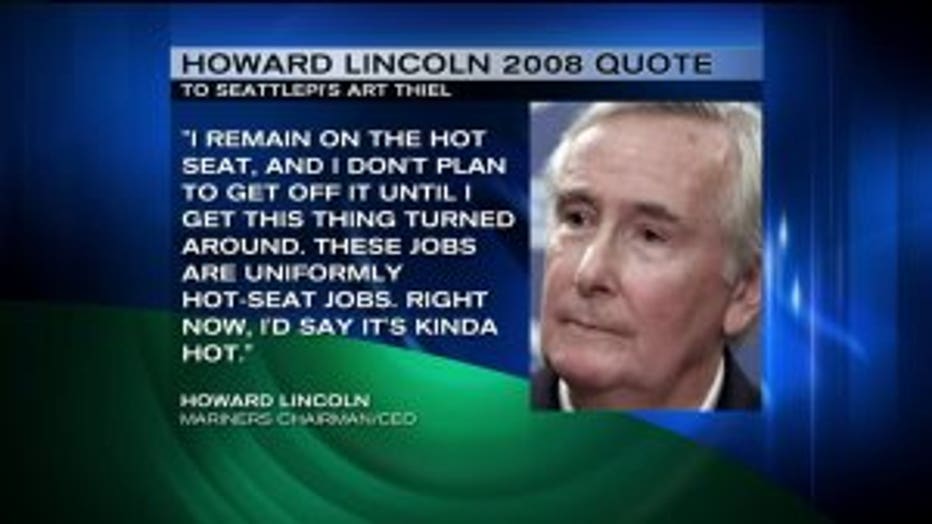 A couple Mariners wins this weekend were very refreshing, but they don’t account for the big picture.

For many fans, “fire Chuck and Howard” has become a rallying cry, but it’s an argument that isn’t just convenient, as some might say.

It has merit, based on even Howard Lincoln’s perspective.

In 2008, Lincoln said this to local writer Art Thiel: “I remain on the hot seat, and I don’t plan to get off it until I get this thing turned around. These jobs are uniformly hot-seat jobs. Right now, I’d say it’s kind of hot.”(Source: http://www.seattlepi.com/sports/article/lincoln-addresses-failures-from-his-1286731.php)

And where are the Mariners now? Still nine games under 500 and, at times, a running joke.

The entire way, Lincoln and Armstrong have been the ones running the show; a show that was once the best in town, but over the last 12 years became a comedy, and lately, somewhat of a tragedy. In just six years, average home attendance has decreased by more than 12,000 per game, more than 600,000 per season.

In the last seven years, Lincoln and Armstrong have seen six different men try to manage their team all on their watch.

And it’s unfair to pin the blame on them? They’re merely convenient scapegoats when things are going bad? Give me a break.

After all, before the 2007 season, it was Lincoln himself who declared that, then General Manager Bill Bavasi, was on the hot seat, but did he fire Bavasi after 2007? No. He waited until midway through the next season, after Bavasi had traded away the Mariners’ entire farm system, including future all-star Adam Jones, to acquire Eric Bedard, who proved worthless.

To this day, many fans still blame Bavasi for our current woes and if that’s the case, the men who stood at Bavasi’s side long enough to make that Bedard trade are equally, if not more, culpable, for its lasting effect on the M’s franchise five years later.

Some might cast my views aside, calling them radical, unfair and extreme, but surely they’ve noticed respected baseball writer Larry Stone’s recent blogs – one titled “Mariners are in a bind that firings won’t cure, without a change at the top,” writes Stone: “under the Armstrong/Lincoln regime, this organization has pretty much been run into the ground over the past decade.”

How about Stone’s article today, titled, “It’s the same tired story for the Mariners.” Maybe my view isn’t as extreme as you thought.

But if they truly loved the Mariners organization as much as they say they do, they’d finally take a look in the mirror and say it’s time to step down, that we’ve had our run. That it was a good effort, but if history has proven itself time and time and time again, we’re just not the right men for the job.

By Lincoln’s own admission five years ago, if his seat was hot then, in my opinion, it should have vaporized by now.

Chuck and Howard, please do us all a favor: enjoy retirement and do so from home.