SEATTLE -- On one of the most exciting Sundays in a while, we’re not putting our spotlight on Pete Carroll or Russell Wilson - or Percy Harvin or Marshawn Lynch.

Instead, we put it on Roddy MacDonald.

“Pete Carroll and his men – I hope they go all the way to the Super Bowl – I hope they can get there,” MacDonald said. “Keep the faith. Keep going.” 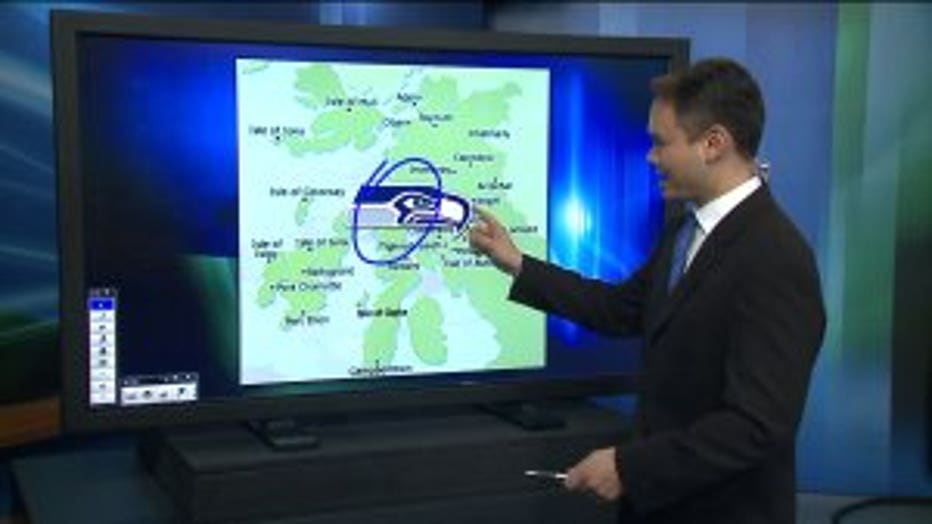 Yesterday, the Seattle Times asked where the 12th Man was watching the game – and fans checked in from not just all over the country – but all over the world – you see some of the answers there – Toronto….The Netherlands….Queensland, Australia….South Korea….Ireland….Norway.

It’s nice to see 12s coming from everywhere – and the NFC Championship game is the perfect time to give a shout out to fans like MacDonald - who come from areas not necessarily known as a Seahawks hot bed.

“We’re in the west coast of Scotland, a little town called Lochgilphead, we’re about 85 miles from Glasgow,” MacDonald said.

Lochgilphead is right here. (Points on Map) So, yes, in the Argyle region known for providing everyone’s favorite type of socks, the Seahawks, are represented by MacDonald and his beautiful family – and 12-14 Scottish neighbors, thanks to MacDonald’s influence!

It’s been fun this year seeing 12s show up for every road game – from filling up bars in Manhattan to taking over all of Glendale, Arizona – Seahawks Nation is no longer a joke. They’re coming out of the woodwork, wanting to be heard. We see the 12th Man Flag everywhere - from the top of Mount Everest to the Great Wall of China to places all over the world – and as we showed you - even in tiny towns in Scotland.

It’s a simple fact: this week – and hopefully this next month – we all have the spotlight. It’s time our voices are heard.

There’s a world of 12s out there – and they’re not just in the Puget Sound.

So what do you think? Where are the Seahawks fans that you know abroad? We’ll be hearing them from far and wide. You can always find me on Twitter @aaronq13fox… or e-mail us at tips@q13fox.com.