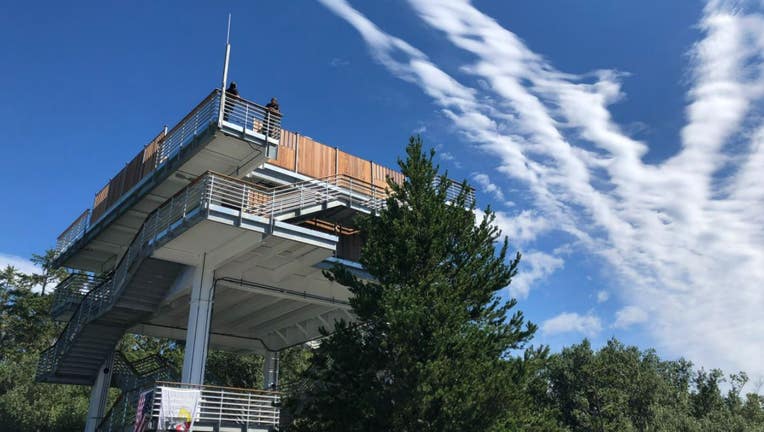 TOKELAND, Wash. - There’s a new option to escape a tsunami for people on the southwest coast of Washington.

There’s a new option to escape a tsunami for people on the southwest coast of Washington.

When the next magnitude 9.0 rip of the offshore Cascadia fault zone happens, people on the Pacific Northwest coast will have some 15 to 35 minutes to get to high ground to escape a possible tsunami.

Tokeland is on a long, flat peninsula with no high ground within walking or running distance for many there.

Shoalwater tribal council member Lynn Clark said at the dedication ceremony that the tower will save lives. Tribal leaders and the Federal Emergency Management Agency said it should be an example and inspiration for other vulnerable coastal communities.

"This allows folks even if it’s 2:30 in the morning in your pajamas to scoop up your family and make it here in a very short amount of time – in under a 15-minute window for nearly everyone from Tokeland Point to the heart of the reservation," Ufkin said.

The tower will be open to all in a disaster. The tower platforms have a capacity of more than 400 people, which is considerably more than the tribal population of the small Shoalwater Bay reservation.

The Tokeland evacuation tower resembles free-standing tsunami towers built in Japan, but officials said it’s the first of its type in North America. Two other tsunami refuges on the Northwest coast — in Newport, Oregon, and Westport, Washington — are reinforced platforms on the roofs of a school or university building.

Design engineer Cale Ash, who worked on the Tokeland tower for Degenkolb Engineers, said tsunami experts modeled the maximum wave height near the mouth of Willapa Bay as 16.3 feet (4.9 meters) and said the design team rounded up to 20.2 feet (6.1 meters) to be safe. He said the floor of the lower platform is 33 feet (10 meters) above the ground and the floor of the upper platform is 43 feet (13.1 meters) high.

RELATED: Forest Service green-lights new monitors on Glacier Peak, one of the most active volcanoes

Ash also said at the dedication that the tower rests on concrete pilings that go 55 feet (16.7 meters) deep to withstand violent shaking of the soft, sandy soils of the peninsula.

The Federal Emergency Management Agency provided $3.8 million toward the design and construction of the Tokeland tower. The Shoalwater Bay tribe contributed an additional $1.2 million to complete the budget.

The most likely next place in the Northwest to build a tsunami evacuation tower is the town of Ocean Shores, Washington, which is working with Degenkolb on a design.

Some emergency planners have qualms about relying on vertical evacuation structures because it leaves a potentially large number of people in a disaster zone who will need to be rescued later.

Ufkin and others say, however, that reaching safety quickly by driving away is unlikely to be an option if a major earthquake buckles roads and topples power poles in low-lying places such as Tokeland – or in Ocean Shores and Long Beach, Washington, and parts of Seaside and Warrenton, Oregon, for example too.

Geologists and emergency planners consider the Cascadia Subduction Zone fault among the most significant disaster threats in the U.S. The offshore fault last ruptured in January 1700, spawning a tsunami that reached all the way across the Pacific to Japan.

The study shows the potential aftermath of a tsunami triggered by a 7.5 magnitude earthquake along the Seattle Fault zone, which crosses east and west through the Puget Sound and downtown Seattle.