Jindo, South Korea (CNN) -- Thirteen more bodies from a capsized South Korean ferry have been discovered, upping the death toll to 49 -- though few expect it will stop there. 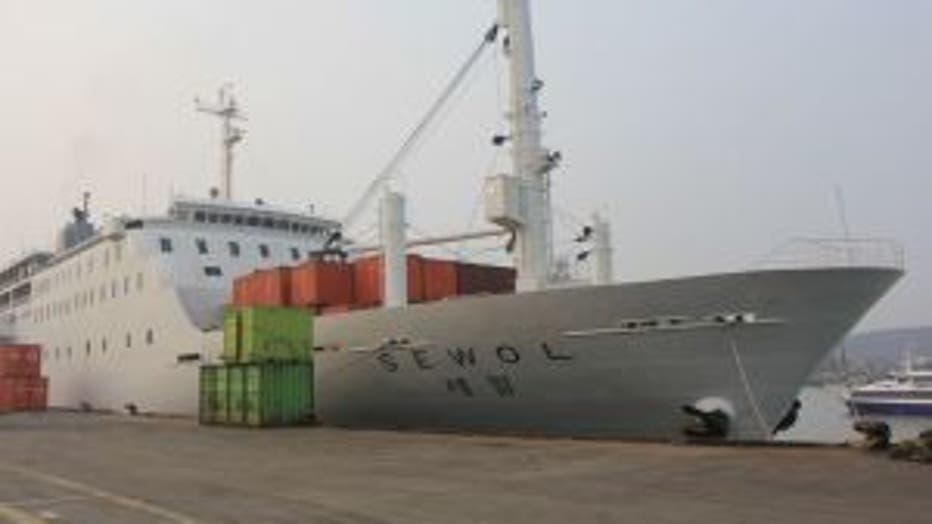 The South Korean coast guard updated the death toll Sunday morning, some five days after the five-story ship went down about 20 kilometers (12 miles) offshore while en route from Incheon to the resort island of Jeju. Some 253 people remain missing, in addition to the 174 who were rescued early in the process.

The new toll includes eight male and two female bodies found by divers inside the cabin of the sunken ferry, according to the coast guard. Another three bodies were spotted floating on the ocean's surface.

These discoveries came a day after medical staff began collecting DNA samples from missing passengers' relatives inside a tent in Jindo, the nearest port.As the rescuers scramble to retrieve the bodies, details are trickling in about what happened the day the ferry capsized.

He appeared before reporters in handcuffs.

"Mr. Lee is charged with causing the Sewol ship to sink by failing to slow down while sailing the narrow route and making (a) turn excessively," prosecutor Lee Bong-chang told the semiofficial Yonhap news agency.

"Lee is also charged with failing to do the right thing to guide the passengers to escape and thereby leading to their death or injury."

If convicted, he faces from five years to life in prison.

Lee wasn't at the helm of the Sewol when it started to sink; a third mate was at the helm, a prosecutor said.

The captain was not in the steering room when the accident occurred, according to police and his own account. He was in his cabin.

A crew member, described as the third mate and identified only as Park, appeared in handcuffs with Lee.

A technician with the surname Cho is also facing the same charges, he said.

Lee answered questions as he left a court hearing Saturday.

"The tidal current was strong and water temperature was cold, and there was no rescue boat," he told reporters, according to CNN affiliate YTN. "So I had everyone stand by and wait for the rescue boat to arrive."

He said he plotted the ship's course, and then went to his cabin briefly "to tend to something." It was then, he said, the accident happened.

The third mate, who was at the helm of the ship when Lee left, said she did not make a sharp turn, but "the steering turned much more than usual."The captain was one of at least 174 people rescued soon after the Sewol began to sink, violating an "internationally recognized rule that a captain must stay on the vessel," maritime law attorney Jack Hickey said.

"Pretty much every law, rule, regulation and standard throughout the world says that yes, the captain must stay with the ship until all personnel are safely off of the ship, certainly passengers."

Hopes of finding the missing alive dimmed further when the entire boat became submerged Friday. Until then, part of the ship's blue-and-white hull was still poking out of the frigid waters of the Yellow Sea.

The coast guard said workers continued to pump air into the hull of the submerged ship, but could not stop its descent. The ferry boat sank 10 meters (33 feet) farther below the surface of the Yellow Sea overnight, Maritime Police told CNN Saturday.

South Korean officials said Saturday they are sending in 176 ships, 28 aircraft and 652 divers to take part in the search and rescue efforts.