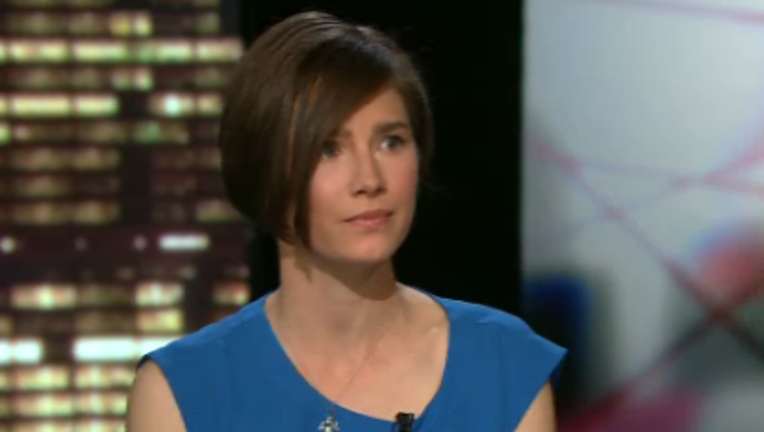 Amanda Knox tells CNN that in the months she had been living with roommate Meredith Kercher, "we were becoming friends." Kercher was stabbed to death in their home in 2011. (Photo: CNN)

NEW YORK (CNN) -- If she had been at the scene of the crime, forensic evidence would prove her guilt, but Amanda Knox says there is nothing -- no DNA, no hair, no footprints, no handprints -- to show she was there.

Knox spoke in an exclusive interview with CNN on Thursday, two days after an Italian court released an explanation of her conviction.

In a retrial, Knox and Raffaele Sollecito, her then-boyfriend, were found guilty in the 2007 death of Meredith Kercher, Knox's onetime roommate.

"I did not kill my friend. I did not wield a knife. I had no reason to," Knox said.

"In the month that we that we were living together, we were becoming friends. A week before the murder occurred, we went out to a classical music concert together ... We had never fought."

Knox struggled to speak at moments in the interview, seemingly overcome by emotion and thoughts of Kercher. But, for the most part, she was calm, collected and methodical in how she broke down arguments in the case.

In its more than 300-page document, the Florence appeals court said a third person convicted in the murder, Rudy Guede, did not act alone, and cited the nature of the victim's wounds.

Ruling Judge Alessandro Nencini, who presided over the second appeal in the case, said Kercher and Knox disagreed over the payment of the rent in the house they shared in Perugia and that "there was an argument then an elevation and progression of aggression."

Knox dismissed those allegations out of hand.

"If I were there, I would have traces of Meredith"s broken body on me. And I would have left traces of myself around -- around Meredith's corpse," she said.

The Florence court in January said that Knox, who also was convicted of slander, was sentenced in absentia to 28 1/2 years in prison. Sollecito's sentence was 25 years.

Claudio Hellman, the judge who tossed their convictions, lashed out at colleagues.

"The Florence Appeal Court has written a script for a movie or a thriller book while it should have only considered facts and evidence. There is no evidence to condemn Knox and Sollecito," said the judge in a scathing statement obtained by CNN.

Knox's conviction has raised questions about her possible extradition to Italy to serve her sentence, since she was in the United States and did not attend the retrial. She gets one more appeal -- to Italy's highest court.

They were first convicted of murder in 2009, but the verdicts were overturned on appeal in 2011.