BELLEVUE -- “I miss her laugh, her smile and just her energy and lively presence and just her caring nature.” That from Tamara McAdams, who was just 11 when her mother went missing nearly 30 years ago. Ellen Inman is a detective with the Bellevue Police Department and explains, “She was last seen on June 1, 1985, and that was at her residence located in Bellevue.” Thirty-six-year-old Julianne Jaillet had been married just six months at the time of her disappearance. McAdams recalls,  “My aunt had spoken to her about a week before this took place. She was in really good spirits, buying new furniture for the new house they were renting in Bellevue.” But a couple of weeks after she went missing, a strange package came in the mail. “Her purse turned up a few weeks later at a hotel in Reno, Nevada, and then it was mailed from Reno Nevada," Inman explains. "The contents of her purse were looked through. She had her wallet and different items in her purse.” “So the purse just shows up, but nobody ever visibly saw her. No hotel rooms checked out, no airlines, no trace of her,” adds McAdams. It was mailed by an employee of the hotel who found the purse just lying around. “It was found in a hotel lobby in Reno, Nevada. Investigators didn’t find any information to substantiate that Mrs. Jaillet stayed at the hotel or that she spent any time or frequented any place in Reno, Nevada,” Inman said. Police are left to figure out not only what happened to Julianne, but also how her purse ended up in Reno. In the meantime, Tamara is still trying to deal with the loss. It's "just kind of a void.  Your mother is kind of a special person, and the holidays, and her birthday is this month, January 28. And just her grandson, my son, (and her) not being able to see him. It’s just tough." Tamara and police are hoping that someone tells what they know about this mystery and provides much-needed answers. “I believe that somebody knows something , there’s probably more than one person. Whether or not they’ll come forward, I know there’s someone who knows something,” McAdams said. Bellevue police created this age progression photo of what Julianne Jaillet could look like today is she`s still alive. If you know anything about her disappearance, or how her purse ended up in Reno, Nev., call an anonymous tip into: CRIME STOPPERS: 1-800-222-TIPS You must call the Crime Stoppers hotline with your tip to be eligible to receive a cash reward for information leading to a fugitive’s arrest. CLICK HERE for information on how to TEXT A TIP to Crime Stoppers 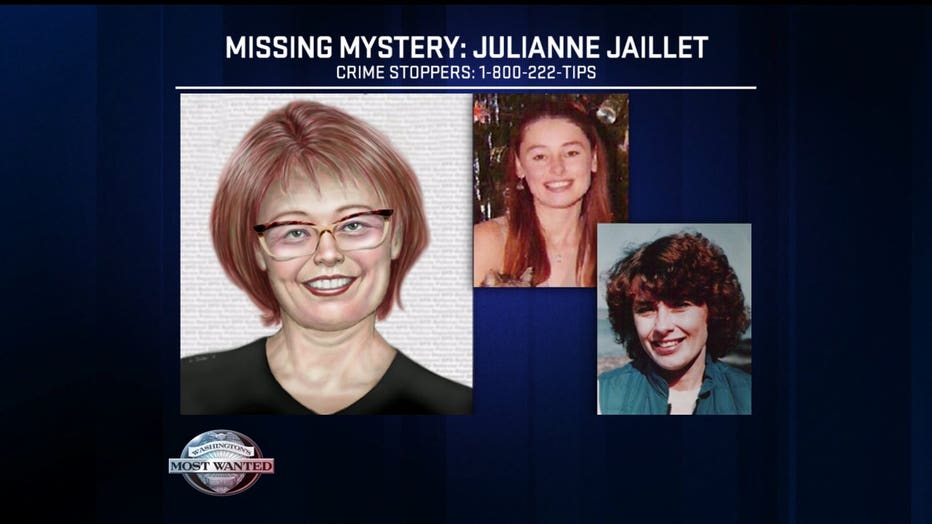