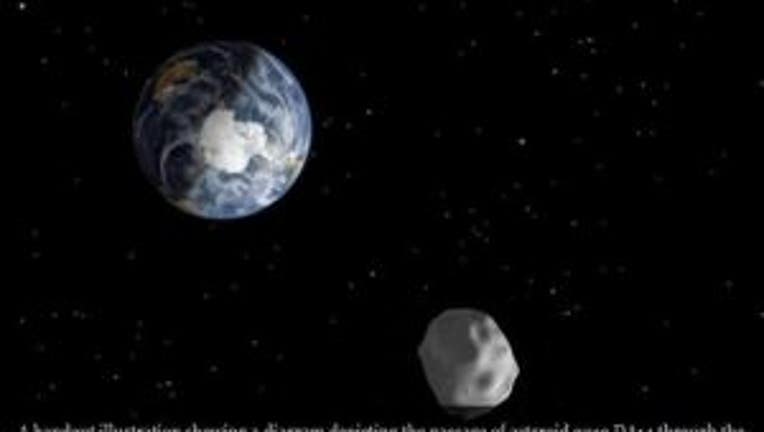 PLANET EARTH -- You can breathe deeply, people of Earth: Asteroid 2012 DA14 did not hit our planet. We are safe for now.

The asteroid did, however, zip by at what NASA researchers called “a remarkably close distance” on Friday. At its closest approach on Friday at 11:25 a.m. PST, it was about 17,000 miles from the Earth’s surface, or about 1/10 the distance between Earth and the moon. That’s the closest an asteroid this size has ever come to Earth in recorded history.

But the scientists at NASA were never worried that the asteroid would actually impact the planet.

“Its orbit is very well known, we know exactly where it is going to go, and it cannot hit the Earth,” said Don Yeomans of NASA’s Near-Earth Object Program Office in a video statement days before the asteroid entered the Earth and moon system.

The asteroid is now hurtling away from Earth at a speed of 17,450 miles per hour, or 4.8 miles per second relative to Earth. It will stay in the Earth and moon system until Saturday at about 4 a.m.

Scientists will continue to track the asteroid for the next several days.

And if you are wondering whether the asteroid’s close approach had any relationship with the meteor that exploded over Russia on Friday morning, the answer from NASA is an emphatic “no.”

“According to NASA scientists, the trajectory of the Russian meteorite was significantly different than the trajectory of the asteroid 2012 DA14, making it a completely unrelated object,” the agency said in a statement. “In videos of the meteor, it is seen to pass from left to right in front of the rising sun, which means it was traveling from north to south. Asteroid DA14′s trajectory is in the opposite direction, from south to north.”