LOS ANGELES - In August, Hurricane Laura battered the Caribbean before making landfall on the Gulf Coast. In 2017, Hurricane Maria, a Category 5 Hurricane, brought as much as a quarter of normal annual rainfall to some regions of Puerto Rico.

These type of events could soon become more frequent, as global warming could drastically increase the risk of extreme hurricanes in the Caribbean, according to a new study.

RELATED: Residents worry about help in aftermath of Hurricane Laura

Researchers at the University of Bristol analyzed future projections of hurricane rainfall in the Caribbean and found that climate change could result in extreme hurricane events being as high as five times more likely.

“Hurricane research has previously focused on the United States, so we wanted to look at the Caribbean region, which has fewer resources to recover. The findings are alarming and illustrate the urgent need to tackle global warming to reduce the likelihood of extreme rainfall events and their catastrophic consequences, particularly for poorer countries which take many years to recover,” said lead author Emily Vosper, research student at the School of Computer Science at the University of Bristol. 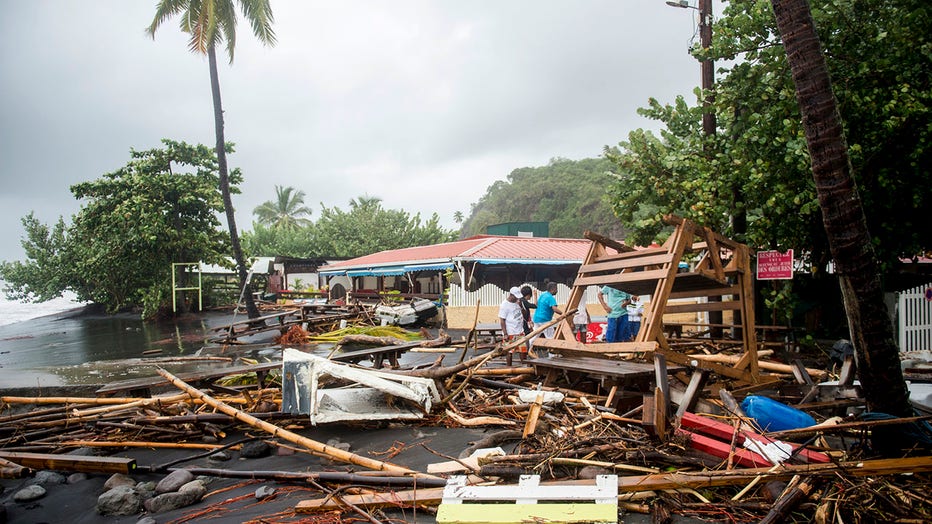 People stand next to debris at a restaurant in Le Carbet, on the French Caribbean island of Martinique, after it was hit by Hurricane Maria, on September 19, 2017

The study, published in “Environmental Research Letters,” generated rainfall statistics by applying a physics-based model and computer model simulations to create synthetic hurricanes, with hopes of uncovering what would happen to Caribbean hurricanes if the world became warmer.

The main objective of the Paris Agreement, an accord within the United Nations Framework Convention on Climate Change, is to keep global temperature warming below 2 degrees Celsius and ideally keep it to 1.5 degrees Celsius.

While some scientists do not believe maintaining a 1.5-degree Celsius increase is attainable, the study found that extreme hurricane rainfall events affect the Caribbean more under the warmer 2-degree climate change scenario.

For example, if the climate was limited to a 1.5-degree Celsius increase, Earth would see significantly fewer intense Caribbean hurricanes - by as much as half in the Eastern regions. That is in comparison to a 2-degree warmer environment, where events such as Hurricane Maria would be twice as likely.

In fact, in the Bahamas, a 100-year storm became 4.5 times more likely under a 2-degree Celsius increase, compared to present day.

This study suggests that finding ways to restrict global warming could significantly reduce the risk of climate-related hazards.

“Resources to mitigate damage are limited, so our findings could help highlight the hotspots in greatest danger and need. An integrated climate risk approach is needed to fully understand the threat of future hurricanes to Caribbean populations,” Vosper said.