SEATTLE – A civil lawsuit has begun against Ride the Ducks Seattle. Multiple people have come forward suing the city, state, the company president, and the manufacturer of the duck boat seeking damages for the deadly 2015 crash on the Aurora Bridge.

On Tuesday, we heard opening statements and even began witness testimony.

We now know the big question for the jury is who is to blame for the lack of maintenance work and repairs done to a failed axle that could cause a wheel to come off on the Ride the Ducks boats. The most compelling part of Tuesday’s trial was the witness testimony from Eric Bishop, the driver of the boat, back in 2015.

In this never-before-seen video, Eric Bishop, the Ride the Ducks boat driver recalls what happened on that deadly day in 2015.

The duck boat crossed the center line and hit a charter bus.

“By this time I’m standing on the brakes, meaning I’ve got enough pressure as I can on them. I am taking that steering wheel and I’m turning that thing for everybody’s life. I am putting so much pressure on that wheel and all sudden it was just like welded. I couldn’t move it,” said Bishop. 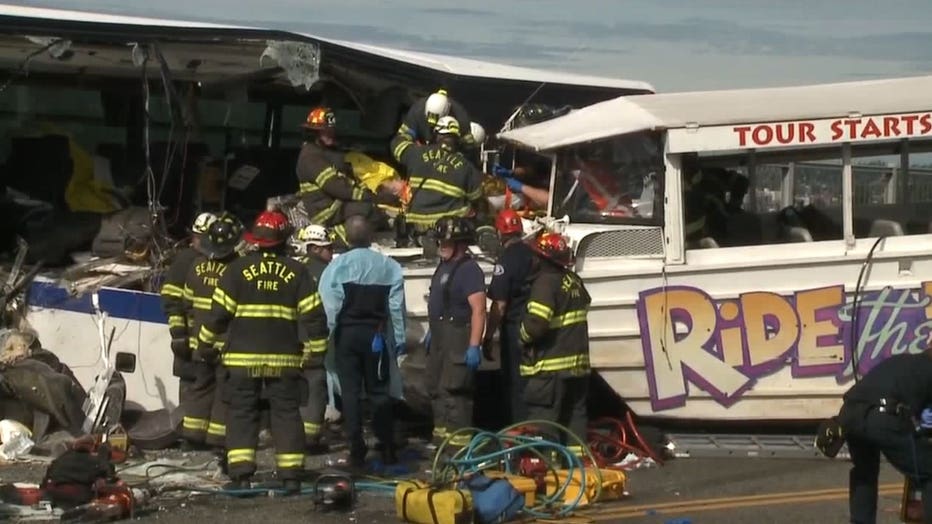 But leading up to the crash, Bishop said his job was fun. He would drive while entertaining dozens of passengers at a time.

“Safety was my number one concern,” said Bishop.

He says he checked around and under the bus. And it was under the bus where other Ride the Ducks vehicles had troubles.  Ride the Ducks International, the parent company of Ride the Ducks Seattle, said it sent out to a service bulletin saying the boats needed an “inspection and reinforcement of the front axle housing assembly” almost two years before the crash.

“Every operator that implemented this service bulletin and followed these instructions, there has not been one problem with the axle housing since,” said Jack Snyder.

But Ride the Ducks Seattle’s lawyer claims it did nothing wrong and this crash was just a horrible accident.

The blame-game continued as lawyers from every party: local Ride the Ducks, the parent company Ride the Ducks International, and the attorneys for the victims all blamed the other for the resulting crash.  Ultimately, Eric Bishop says he still blames himself.

“I’m still responsible for the safety of passengers,” said Bishop.

Bishop is involved in another lawsuit, but in this trial, he was just a witness.  We learned Tuesday that Bishop says he left he scene shortly after firefighters arrived.