City of Tacoma lays out plan to crack down on crime

The City of Tacoma is laying out a plan to address the problems its community is seeing with crime.

TACOMA, WA - The City of Tacoma is laying out a plan to address the problems its community is seeing with crime.

Tacoma has struggled with crime this year, specifically with increasing homicide numbers, arsons, and assaults.

In a joint statement released by council this week, city leaders are laying out a plan to reduce violent crimes, which includes in part:

"I am so proud of my neighbors for stepping up and demanding better services for our community.  The letter to our community last night from the entire council should mean more results.  A few on our Council have been asking for more attention, more accountability for results addressing increases in crime, trash and encampments for years.  Citizens deserve streets they feel safe to walk with their family, businesses shouldn’t fear damage to their investments in our community.  We must do better and this letter is another step in that direction.  Now, citizens must see changes in presence and results," said councilmember Robert Thoms.

Thoms, and several other councilmembers, wrote a letter a few months ago requesting more police presence.

Some local business owners say they welcome the increased patrols.

"Good; then I’ll be feeling like I got something for my tax dollars I pay. Yeah, I’d feel really good about that. Because like I said, unless you have anything to be afraid of the police for, if you’re doing crimes, you don’t have anything to worry about, and they’ll be doing their job and that’s to protect my property," said Jonathan Clark.

Clark is the general manager of Bob’s Bar-B-Q Pit in Tacoma’s Hilltop neighborhood. He says he's dealt with vandalism and property destruction at his business and thinks more patrols may help deter some of the issues.

However, the question is where will the increased patrol visibility come from?

According to Tacoma Police numbers from earlier this month, TPD is down 42 commissioned officers, which is about 12 percent of what is budgeted. 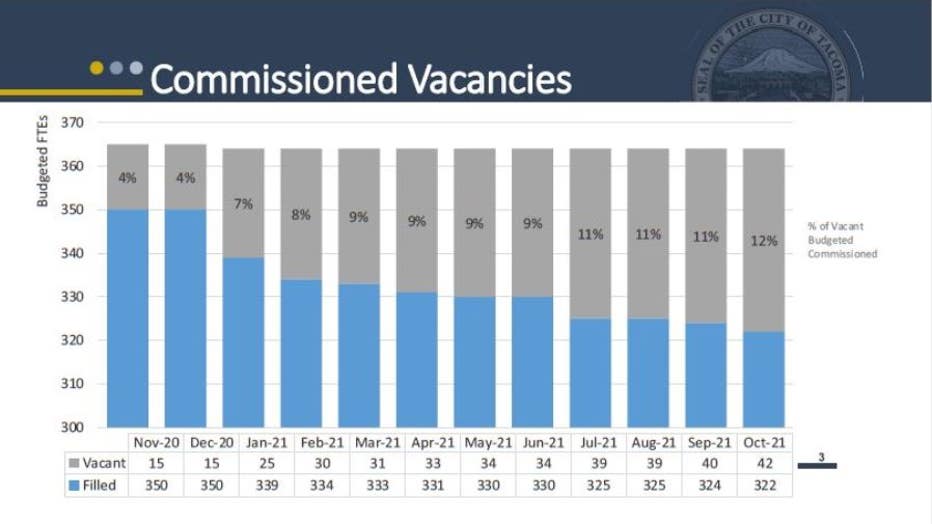 Numbers also show, overtime costs for TPD is in the hundreds of thousands every month. 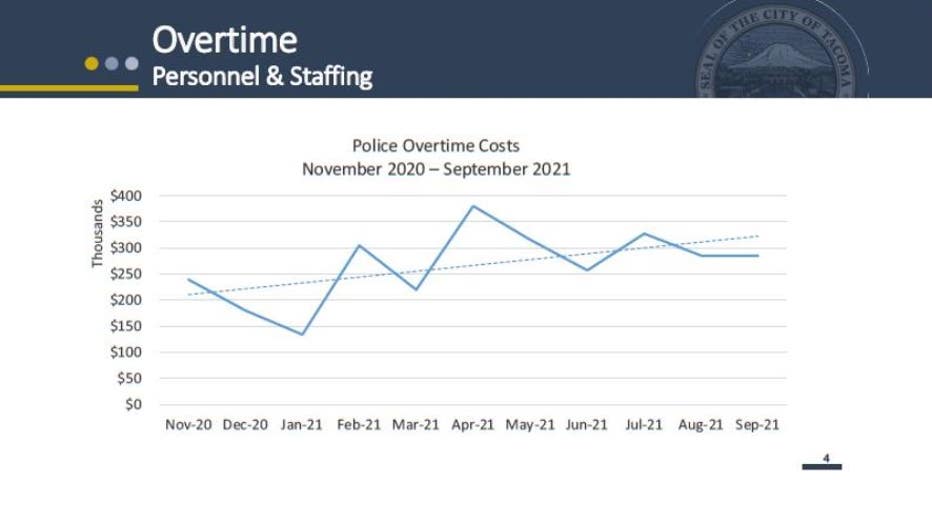 FOX 13 News spoke with TPD about the focus on increasing patrol visibility. Department officials tell us they will use overtime for the increased patrols.

TPD is budgeted to fill all the vacant commissioned officer positions; however, the process could take upward of a year due to the time required for training.