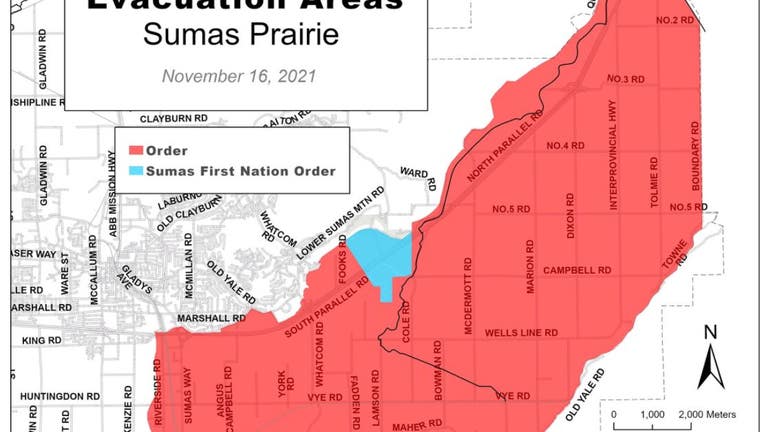 Abbotsford is right on the U.S. border. Officials with the city of Sumas in Whatcom County said they are monitoring the situation, and if they see a significant change in the water levels that require immediate action, they will send out an emergency alert to residents' cell phones.

Officials in Abbotsford tweeted Tuesday evening that an "immediate and urgent notice to all residents that did not yet evacuate Sumas Prarie to evacuate immediately. Conditions within Sumas Prarie within the last hour have escalated and pose a significant risk to life."

The city of Abbotsford followed up with a tweet saying, "This event is anticipated to be catastrophic. Residents remaining [that] can't evacuate safely are requested to call 911 and report their location immediately."

The city of Sumas said as a precaution, have a grab bag ready just in case.

"If you have the ability and desire to safely leave your homes as a precaution, now would be a good time to do that. Please do so in a slow and safe manner," the city announced on Facebook.

The city said they are not expecting anything to change significantly in the overnight hours.

On Wednesday morning, Abbotsford police said crews were at the scene of a large structure fire in the area of Sumas Mountain Road & North Parallel Road at about 6:45 a.m.

Residents in the area are encouraged to stay indoors due to the potential of the smoke being toxic.

FOX 13 Morning News had a crew in the city of Sumas, where the smoke could be seen.