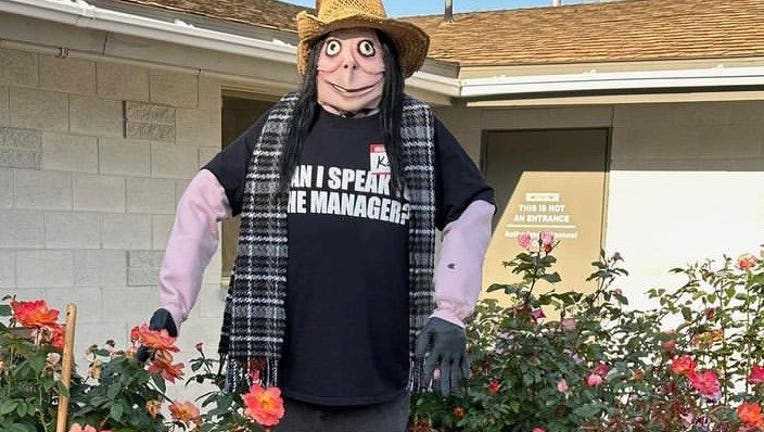 PROSSER, Wash. - The City of Prosser took down a ‘Karen’-themed Halloween display at City Hall after residents found it offensive.

An image shared by Historic Prosser shows a scarecrow dressed in a scarf and t-shirt reading, "Can I speak to the manager?" The scarecrow had an unsettling ‘Momo’ mask and straw hat.

City officials said the display was not named at anyone, but took the display down following complaints from some residents, Tri-City Herald reports.

"The City of Prosser removed the Halloween display at City Hall and has withdrawn its entry into the Historic Downtown Prosser decorating contest," reads a press release from the city following the display’s removal. "City officials acknowledge the display was inconsistent with the spirit of the competition."

‘Karen’ is defined on Wikipedia as a "pejorative term for a white woman perceived as entitled or demanding beyond the scope of what is normal."

The term has its roots in internet meme culture, and became popular during the COVID-19 pandemic, particularly in videos of essential workers being harassed by customers.

According to the Herald, the ‘Karen’ dig goes deeper than just the surface-level joke.

Friends of Downtown Prosser, a group that opposes an upcoming $16.8 million bond to replace City Hall and the police station, claimed the display was aimed directly at one of their leaders.

City officials deny the link, but did not specify the approval process for the display.