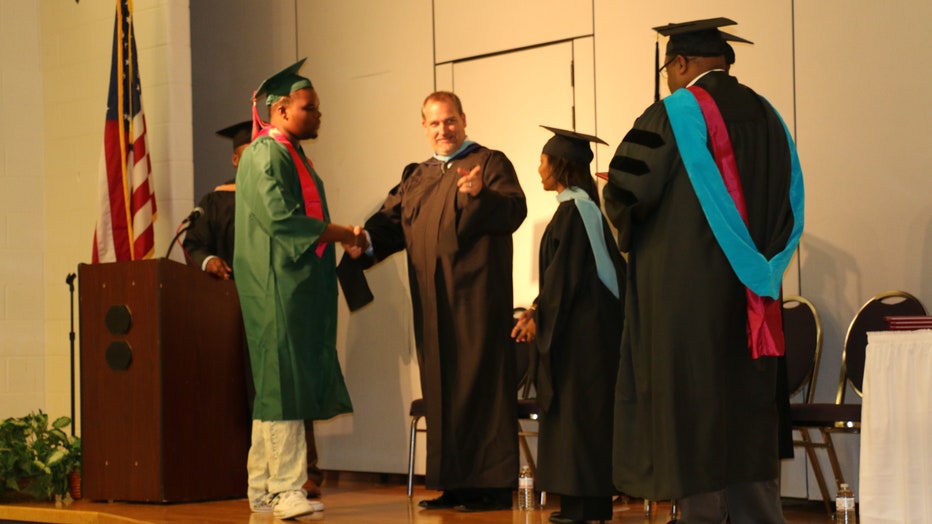 
FERGUSON, Missouri (CNN) -- It's been four days since a Ferguson, Missouri, police officer shot and killed teenager Michael Brown, and the public still does not know the name of the person who pulled the trigger.

Despite cries of a cover-up, there's good reason for the silence, local officials say. Since the shooting Saturday, police have received death threats against the officer, and it has spread from there, Ferguson Mayor James W. Knowles said Wednesday on CNN's "New Day."

"Hackers have tried to find personal information and display it online on social media, asking people to target myself, council members, the police chief," he said. "The county police chief's own home was put on Instagram, and people (were) asked to go there and assault him."

The threats and continued protests, including demonstrations Tuesday night, highlight heightened tensions in the St. Louis suburb and nationally over the shooting of Brown, an 18-year-old Ferguson resident killed in what police say was a dangerous struggle and what witnesses say seemed a brazen act of aggression.


Overnight, police fired tear gas at protesters who threw bottles at them and, in events believed to be unrelated to the protests, two shootings occurred -- one involving a police officer.

On Wednesday, Ferguson's police chief told CNN that the officer who shot Brown had been injured in the scuffle, and the Police Department issued a statement saying that "Ferguson mourns the loss of Michael Brown's life" and that it had "heard the community's cries for justice."

At the same time, the department asked protesters to restrict their gatherings to daylight hours.

"Unfortunately, those who wish to co-opt peaceful protests and turn them into violent demonstrations have been able to do so over the past several days during the evening hours," the department said.

A call for transparency

On Tuesday, the lawyer representing Brown's family blasted the decision not to release the officer's name, suggesting authorities were protecting one of their own rather than following standard procedures.

"That doesn't give the community confidence. That doesn't make it transparent," attorney Benjamin Crump told reporters. "And remember, we've got a long way to go before this community starts to believe that the police are going to give them all the answers and not try to sweep it under the rug."

Crump was one of the attorneys who represented the family of Trayvon Martin, the teenager who was killed in a 2012 altercation with Florida man George Zimmerman.

He said police should have released the officer's name 72 hours after the shooting. If police are going to ask residents of Ferguson to obey the law, he said, "then it's got to work both ways."

"The prosecuting attorney and the St. Louis County police chief agree that this is the prudent step to take under the circumstances," he said.

"We started getting death threats against him and his family, and although that's not most of the people, we took these things seriously," Jackson said.

Someone claiming to be part of the shadowy Internet organization Anonymous also posted a video to YouTube on Tuesday promising to hack city websites and release information on Ferguson police unless the identity of the officer involved was released.

The crowds dispersed after some demonstrators threw bottles at police, who responded with tear gas. No injuries were reported.

The latest protest follows clashes with police and looting Sunday and Monday. Police have made 47 arrests after Brown's shooting, KMOV reported.

Blocks away from where the protests took place, there were two shootings overnight. But police do not believe the violence was related to the protests.

One of them pulled a handgun on an officer, who shot the suspect. The suspect is in the hospital in critical condition, KSDK reported.

He said, he said

What led up to Brown's death Saturday is a point of major contention.

Witnesses say the African-American teen was unarmed and his hands were in the air when he was shot. Police have said Brown attacked the officer and tried to take his gun.

On Wednesday, Jackson told CNN that the officer had been hit and suffered swelling on the side of his face. He was taken to a hospital and released the same day, Jackson said.

Police had not before offered any indication that the officer had been injured in the reported struggle.

The officer, Jackson said, is shaken by what happened.

As federal civil rights investigators and the FBI carry out their own inquiry into the controversial case, tensions are running high in the town of 21,000, where there's a history of distrust between the predominantly black community and the largely white police force.

"Race relations is a top priority right now and, as I said, I'm working with the Department of Justice to improve that," Jackson told reporters Wednesday, adding that he has tried to increase the diversity of the department since he got there.

Only three of the city's 53 officers are African-American.

Dorian Johnson, who said he saw the shooting, told CNN on Tuesday that the officer who opened fire is white.

Johnson said he was walking with Brown in the street when the confrontation erupted.

Police didn't speak to him about the shooting that day, Johnson said, adding that the officer seemed stunned afterward.

"It's almost like he wasn't paying attention to me anymore. It's like he was in shock himself, and his vision wasn't on anything but my friend Big Mike," he said.

Johnson's attorney told CNN that police reached out to him Tuesday to set up an interview.

"We are still in the information gathering part of the investigation," St. Louis County Prosecuting Attorney Bob McCulloch said Wednesday. "There is so much information out there -- some of it good, some of it bad."

He urged anyone with information about the shooting to step forward and promised to go wherever the investigation leads.

"We will do a full, fair, complete and impartial investigation into this. Nothing will be left untouched," McCulloch said.

Amid protests, calls for calm

At a news conference with other African-American leaders on Tuesday, the Rev. Al Sharpton urged people in Ferguson not to "betray the gentle giant" that Brown was by allowing their anger over his killing to lead to violence.

"I need all of us to come together and do this right, the right way, so we can get something done about this," he said.

President Barack Obama echoed calls for calm, releasing a statement expressing condolences to the teen's family and describing his death as heartbreaking.

"As details unfold, I urge everyone in Ferguson, Missouri, and across the country, to remember this young man through reflection and understanding," Obama said. "We should comfort each other and talk with one another in a way that heals, not in a way that wounds."

Brown was going to defy negative stereotypes, staying away from the street life that plagued many African-American young men by instead going to college, his mother said.

"People may do things and it becomes repetitive in a certain race, but we didn't. We don't live like that. Not our family," his mother, Lesley McSpadden, told CNN.

"We feel like we can do anything and go anywhere. ... Just because my son is a 6-foot-4-inch black male walking down a city street does not mean he fit the profile for anything other than just walking down the street."