Home sales are falling as interest rates rise, but if you’re waiting for prices to go down, experts say you may be waiting a little longer: Average home prices in February were up 19.8% over the same time last year — marking the third-highest jump in 35 years.

According to the S&P CoreLogic Case-Shiller index, two of the cities on the 20-city composite list recorded year-over-year increases higher than 30%, while six cities on the list saw prices climb more than 25%. All 20 cities saw double-digit increases over last year.

"That level of price growth suggests broad strength in the housing market, which is exactly what we continue to observe," Craig J. Lazzara, managing director at S&P SJI, says in the report.

Despite the robust market, Lazzara says "extraordinary" price increases may not last much longer thanks to high inflation and the Federal Reserve raising interest rates in response.

"We may soon begin to see the impact of increasing mortgage rates on home prices," Lazzara noted.

Where did home prices increase the most? 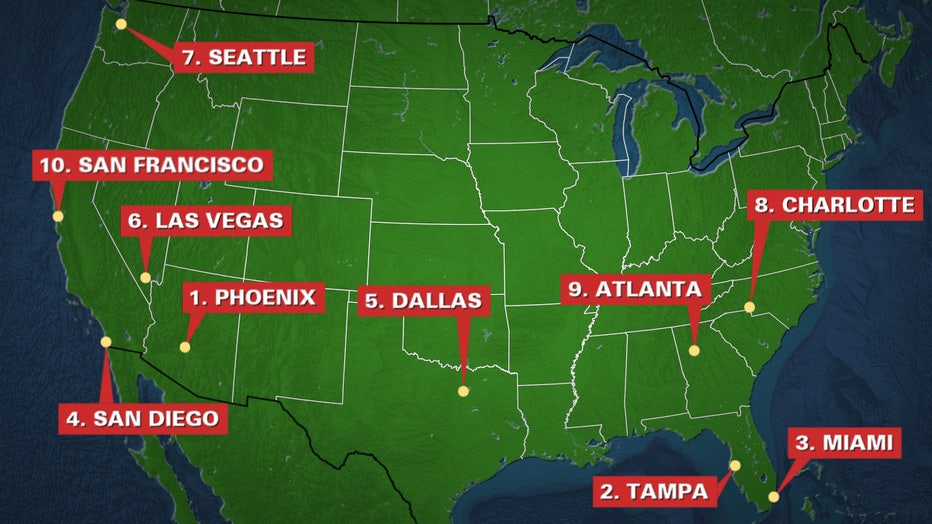 Phoenix topped the list for the 33rd consecutive month with a whopping 32.9% year-over-year increase. Tampa, Florida, was a close second at 32.6%. In Miami, which came in third, home prices were up 29.7% over the same time last year.

Charlotte, North Carolina; Dallas; Las Vegas; San Diego, and Seattle also saw home prices jump more than 25%, though researchers say the biggest gains were seen in the South and Southeast regions of the U.S., at 28.1% and 27.9% respectively. The S&P CoreLogic index is calculated quarterly based on home prices from the nine U.S. Census divisions.

Washington, D.C., New York and Minneapolis had the slowest gains, but still above 10%. On average, homes sold in just 18 days in February, according to the National Association of Realtors. The median home price in the U.S. was $375,300 as of April 28, NAR reports, and the cost of buying a home is 40% higher than it was a year ago, according to realtor.com.

Here’s where the other cities landed on the index:

Although home prices remain at historic highs, home sales are declining as mortgage rates rise. Experts say prices will likely come down as a result, but by how much is still unclear.

As of Thursday, the average rate on a 30-year fixed-rate home loan stood at 4.85%, according to realtor.com. In mid-April, the average hit 5% for the first time in more than a decade. A year ago, the 30-year rate was 3.04%, according to Freddie Mac.

While researchers say rising mortgage rates should help slow the growth of home prices, the higher rates will also make home-owning even less affordable for those taking out a loan. Realtor.com data shows homes staying on the market for an average of 38 days as of April 28.

Inventory is still a problem, realtors say, with the number of homes remaining at near record lows. A quarter of all homes sold in February were purchased with cash, up from 22% a year ago, and real estate investors accounted for 19% of transactions in February.

Would-be buyers who applied for a home loan in February faced a median monthly mortgage payment of $1,653, including principal and interest, an increase of 8.3% from a year ago, according to the Mortgage Bankers Association.

Interest rates are expected to rise again after the Fed meets on May 4. Jerome Powell, chairman of the Federal Reserve, has signaled a rapid series of rate increases to combat higher prices and slow the economy enough to tame inflation. Economists are skeptical that this can be done without causing a recession.

The Associated Press & FOX's Stephanie Weaver contributed to this report. This story was reported from Seattle.