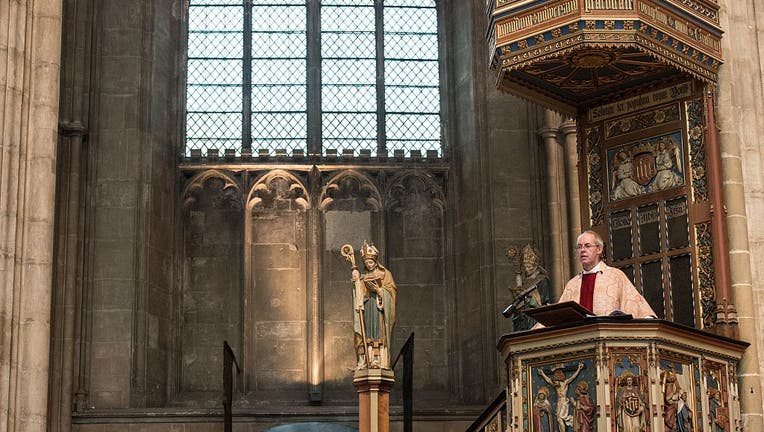 The Archbishop of Canterbury, Justin Welby, speaks from his pulpit and delivers his Christmas Day sermon to the congregation at Canterbury Cathedral on December 25, 2015 in Canterbury, England. (Photo by Chris Ratcliffe/Getty Images)

LONDON (AP) - The Church of England said Wednesday it will allow blessings for same-sex, civil marriages for the first time but same-sex couples still will not be allowed to marry in its churches.

The decision followed five years of debate and consultation on the church's position on sexuality. It is expected to be outlined in a report to the church's national assembly, the General Synod, which meets in London next month.

Under the proposals, the Church of England's stance that the sacrament of matrimony is restricted to unions between one man and one woman will not change.

However, same-sex couples would be able to have a church service with prayers of dedication, thanksgiving or for God's blessing after they have a civil wedding or register a civil partnership.

Same-sex marriage has been legal in England and Wales since 2013, but the church did not change its teaching when the law changed.

Archbishop of Canterbury Justin Welby, the spiritual leader of the Anglican Church, acknowledged that the proposals "will appear to go too far for some and not nearly far enough for others."

"This response reflects the diversity of views in the Church of England on questions of sexuality, relationships and marriage. I rejoice in that diversity and I welcome this way of reflecting it in the life of our church," Welby said.

"I hope it can offer a way for the Church of England, publicly and unequivocally, to say to all Christians and especially LGBTQI+ people, that you are welcome and a valued and precious part of the body of Christ," he added.

The church said bishops plan to issue a formal apology to LGBTQ people on Friday for the "rejection, exclusion and hostility" they have felt from within the church.

It said it would issue pastoral guidance to its ministers and congregations and urge them to welcome same-sex couples "unreservedly and joyfully."

Archbishop of York Stephen Cottrell apologized for "the way LGBTQI+ people and those they love have been treated by the church which, most of all, ought to recognize everyone as precious and created in the image of God."

"We are deeply sorry and ashamed and want to take this opportunity to begin again in the spirit of repentance which our faith teaches us," he said. "This is not the end of that journey, but we have reached a milestone, and I hope that these prayers of love and faith can provide a way for us all to celebrate and affirm same-sex relationships."

Cottrell said the proposals will not be "what everyone wants," but further changes will require a legislative overhaul and there was currently no majority supporting such change.

Jayne Ozanne, a prominent campaigner for LGBTQ people in the church, said the bishops’ decision was "utterly despicable."

"I cannot believe that five years of pain and trauma has got us here. We have had countless apologies over the years but no action to stop the harmful discrimination," she tweeted.

The General Synod is expected to discuss the proposals in detail during its Feb. 6-Feb. 9 meeting.