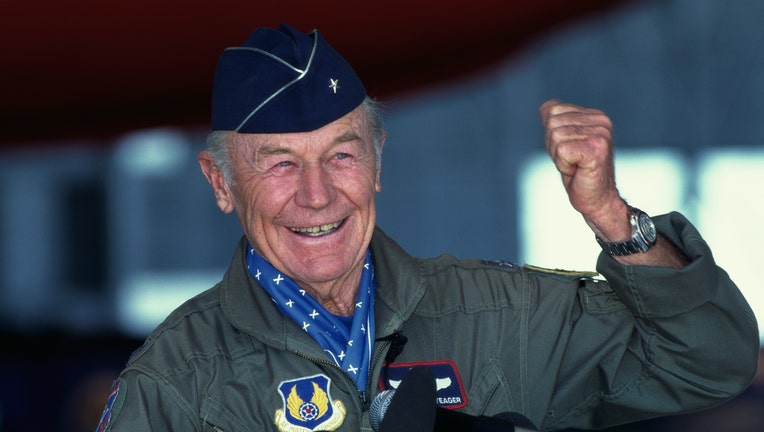 Chuck Yeager during a press conference at Edwards Air Force Base during the 50th anniversary celebration of his October 14, 1947 Bell X-1 flight, in which he became the first man to break the sound barrier. Yeager again flew at the speed of sound, on

Chuck Yeager, the historic test pilot portrayed in the movie “The Right Stuff,” is dead at the age of 97, according to a tweet posted on his account late Monday.

"It is w/ profound sorrow, I must tell you that my life love General Chuck Yeager passed just before 9pm ET," said the tweet, attributed to his wife, actress Victoria Scott D'Angelo. "An incredible life well lived, America’s greatest Pilot, & a legacy of strength, adventure, & patriotism will be remembered forever."

The legendary pilot and retired brigadier general became the first man to fly faster than the speed of sound on Oct. 14, 1947. 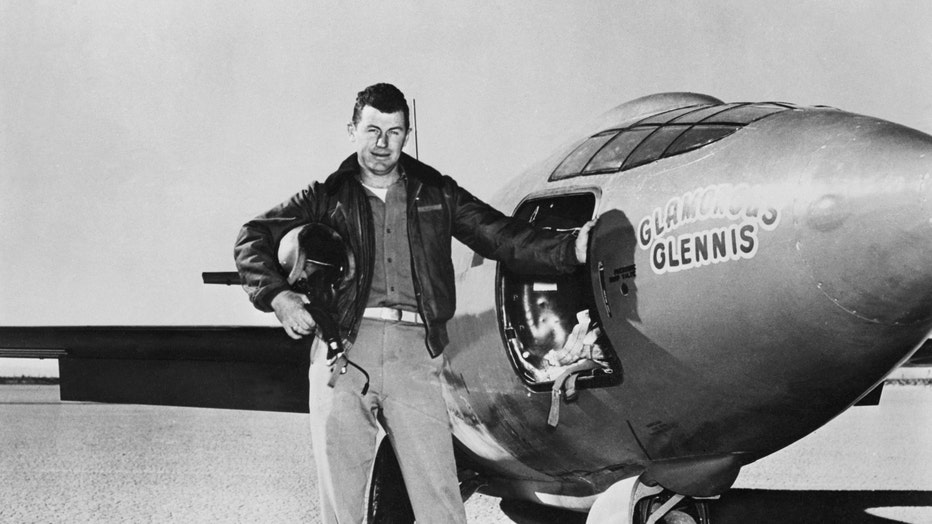 The flight in the Bell X-1, which saw him travel to 700 miles per hour, launched the Space Age. But for Yeager, then 24, it was just another job for a young test pilot.

The rocket-propelled orange airplane was nicknamed the "Glamorous Glennis" after Yeager's first wife, who passed away in 1990. The aviation feat, meanwhile, was kept secret for months.

He later received widespread recognition because of Tom Wolfe’s book, ″The Right Stuff,″ and the movie based on it, where he was portrayed by actor Sam Shepard.

It told the story of the first astronauts.

"I was the 1st Commandant of ARPS 1st school for training 1st astronauts," Yeager wrote. "I am fully aware of US goals: Presidents Eisenhower, JFK, Johnson & Nixon: US will get to the moon 1st. & we did. 1st step was getting above MACH 1. We did that 1st, too."

NASA Administrator Jim Bridenstine called his death "a tremendous loss to our nation."

“Gen. Yeager’s pioneering and innovative spirit advanced America’s abilities in the sky and set our nation’s dreams soaring into the jet age and the space age. He said, ‘You don’t concentrate on risks. You concentrate on results. No risk is too great to prevent the necessary job from getting done,'” Bridenstine said in his statement.

Yeager was born on February 13, 1923, in Myra, W.Va. His family moved to Hamlin, a town of 400 people when he was five, according to his website. He graduated in 1941 and enlisted in the Army Air Corps that September.

In 1987, he returned to his hometown to mark the 40th anniversary of his sound barrier feat.

″Little did I realize when I left this town to join the Army Air Corps in September 1941 ... that I would come back here to see a statue of myself in front of Hamlin High School, where I spent so many wicked days,″ said Yeager.

Yeager entered combat in 1944 and claimed to have shot down one German aircraft, before being shot down himself, on his eighth combat mission on Mar. 5. He evaded capture and rejoined his unit in England.

Blessed with exceptional vision, he totaled 12.5 aerial victories and shot down 13 German planes on 64 missions during World War II, "including five Me109s on 12 October and four FW 190s on 27 November," his website added.

“That day was a fighter pilot’s dream. In the midst of a wild sky, I knew that dogfighting was what I was born to do," he said of the battles on Nov. 27.

After World War II, he became a test pilot beginning at Wright-Patterson Air Force Base in Dayton, Ohio.

WATCH LIVE ON YOUR MOBILE DEVICE

Among the flights he made after breaking the sound barrier was one on Dec. 12. 1953, when he flew an X-1A to a record of more than 1,600 mph. He later returned to combat during the Vietnam War, where he flew several missions a month in twin-engine B-57 Canberras making bombing and strafing runs over South Vietnam.

Following his passing, Sen. Joe Manchin, D-W.Va. called Yeager, who received the Presidential Medal of Freedom in 1985, "an American hero."

"West Virginia’s native son was larger than life and an inspiration for generations of Americans. He bravely served our nation as a pilot for more than 30 years in the U.S. Air Force during World War II and Vietnam," Manchin wrote on Twitter.

"When @GenChuckYeager  became the first pilot to break the sound barrier he challenged each of us to test the limits of what’s possible. I am grateful to have gotten to know this legendary West Virginian and to call him my dear friend," Manchin continued.

The X-1 is currently on display at the National Air and Space Museum in Washington, D.C.

"We mourn the passing and celebrate the life and legacy of a pilot who truly had the right stuff, General Chuck Yeager," the National Air and Space Museum wrote on Twitter. "In 1947, Yeager broke the sound barrier and proved that we can always keep pushing further and faster."

Yeager retired from the Air Force in 1975 and moved to a ranch in Cedar Ridge in Northern California where he continued working as a consultant to the Air Force and Northrop Corp. He flew for more than 60 years, including piloting an F-15 to near 1,000 mph at Edwards Air Force Base in October 2002 at the age of 79.

“Living to a ripe old age is not an end in itself. The trick is to enjoy the years remaining,” he said in “Yeager: An Autobiography.”

“I haven’t yet done everything, but by the time I’m finished, I won’t have missed much,” he wrote. “If I auger in (crash) tomorrow, it won’t be with a frown on my face. I’ve had a ball.”