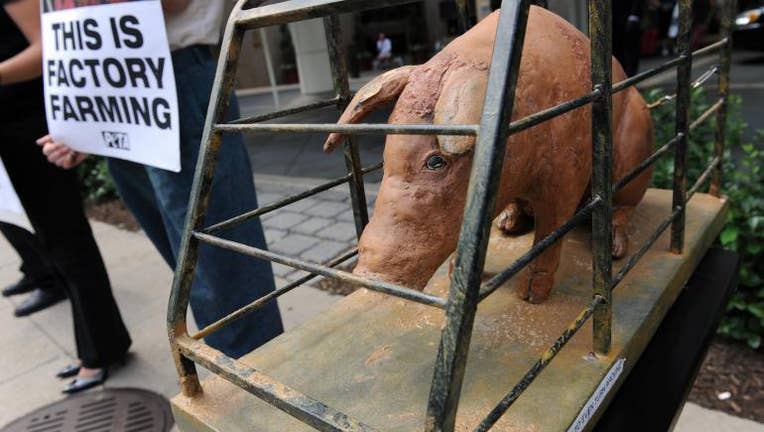 
HOBOKEN -- New Jersey Gov. Chris Christie vetoed a bill Friday that would have banned crates that severely limit the mobility of pregnant pigs, a move that will win favor with Iowa farmers and spark more speculation about Christie's presidential aspirations but cause outrage among animal rights activists who pushed for the ban.

Critics consider the small metal crates a form of animal cruelty -- the pigs aren't able to turn around in the limited space -- but advocates say they prevent sows from accidentally lying down or stepping on piglets.

Despite its strong bipartisan support in the state legislature, the Republican governor vetoed a version of the bill in 2013. When a nearly identical version passed again in the Democratic-led legislature, Christie faced mounting pressure this fall from activists and celebrities, including Bill Maher, Danny DeVito, Martha Stewart and Edie Falco.

Jon Stewart gave the issue wider attention when he featured it in a segment on Comedy Central's "The Daily Show" this month. And Matthew Scully, a former speechwriter and adviser to President George W. Bush, wrote a lengthy essay for National Review Online, spelling out a case for banning the crates.

In a statement, Christie said the bill is a "solution in search of a problem" and a "political movement masquerading as substantive policy." Arguing that it's not a practice in New Jersey, Christie said it should be left to the state's Board of Agriculture, which currently doesn't outlaw the crates.

The move, announced by his office the day after Thanksgiving, places 2016 squarely in the spotlight. With more than 20 million pigs, Iowa is the nation's largest pork producer, and the state's governor, Terry Branstad, told The Associated Press that he urged Christie to veto the bill when a similar version came to the New Jersey governor's desk last year.

Branstad also said he and Christie talked about the latest measure during an Iowa event last month.

With Iowa holding the nation's first presidential nomination caucuses, Christie's veto will almost surely spark further speculation that he is intent on moving forward with a presidential campaign.

According to the Humane Society of the United States, nine other states are moving away from the practice, while companies like McDonald's, Wendy's, Safeway and Burger King are discontinuing the crates from their supply chains.

"This veto shows cynical political calculation from the governor and an obvious capitulation to special interests, rather than leadership or humanity," said Wayne Pacelle, president of the Humane Society.

New Jersey state Sen. Ray Lesniak, who authored the legislation, said Christie is "putting his personal political ambitions ahead of the humane treatment of animals."

"It has the support of the people of New Jersey as well as Republican and Democratic lawmakers in the Legislature, but the governor chose to follow the dictates of special interests in Iowa," he said in a statement.