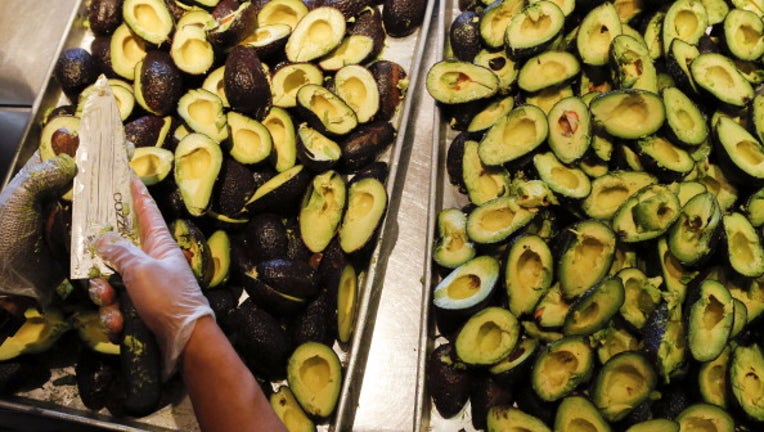 An employee slices avocados to be made into fresh guacamole at a Chipotle Mexican Grill.

The restaurant chain, in an annual report, listed drought and global weather change among a long list of business risks faced by the company.

"Increasing weather volatility or other long-term changes in global weather patterns, including any changes associated with global climate change, could have a significant impact on the price or availability of some of our ingredients," Chipotle said in the filing last month.

If the cost of ingredients jumps, the company said it "may choose to temporarily suspend" serving items such as guacamole or some salsas.

The warning was highlighted Tuesday by ThinkProgress, a liberal blog.

The good news is Chipotle customers won't have to deal with guacamole withdrawal anytime soon.

"This is nothing more than routine risk factor disclosure. The sky is not falling," said Chipotle spokesman Chris Arnold. "I wouldn't read too much into this."

Chipotle's company's policy includes a "food with integrity" program that stresses using organic meats and crops whenever possible with an eye towards the sustainability of the food supply.

California, a major source of the nation's avocado crop, is currently suffering from a severe drought, despite heavy rains in the last week.

Arnold did not have any figures on how much prices might increase due to the drought, but said a slight price increase is far more likely than any shortages.

"We saw similar issues in 2011 and incurred higher prices for the avocados we used, but never stopped serving guacamole," he said.

A 2006 study by scientists at Lawrence Livermore National Laboratory projected that California's agriculture production, including that of avocados, could be cut by as much as 40% by the middle of the century due to global climate change.