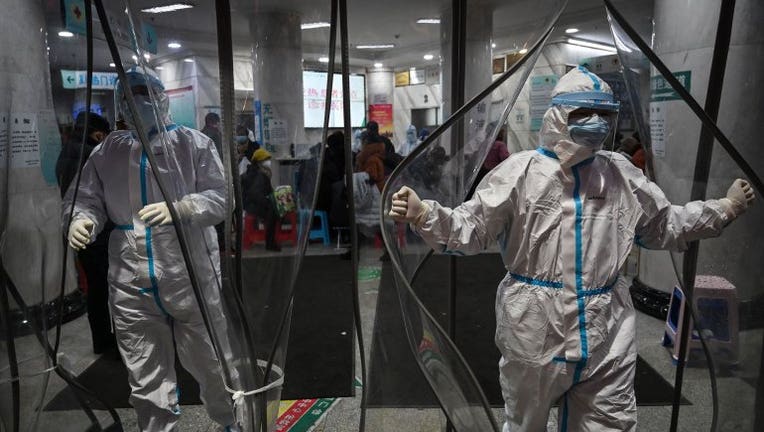 Medical staff members wearing protective clothing to help stop the spread of a deadly virus which began in the city, walk at the Wuhan Red Cross Hospital in Wuhan on January 25, 2020. (Photo by HECTOR RETAMAL/AFP via Getty Images)

(CNN) -- China's health minister Ma Xiaowei had some very bad news Sunday about the Wuhan coronavirus: He said people can spread it before they have symptoms.

"This is a game-changer," said Dr. William Schaffner, a longtime adviser to the US Centers for Disease Control and Prevention.

It's much harder to contain a virus -- to track down a patient's contacts and quarantine them immediately -- if the patient was spreading the disease for weeks before they even realized they had it.

"It means the infection is much more contagious than we originally thought," said Schaffner, an infectious disease specialist at Vanderbilt University Medical Center. "This is worse than we anticipated."

A spokesperson for the CDC was not immediately available for comment on Sunday.

If the Chinese health minister is right -- and there are those that doubt him -- that means the three confirmed cases in the United States might have been infectious while flying from Wuhan to California, Illinois and Washington state.

The Wuhan coronavirus has killed more than 50 in China and infected thousands there, and spread as far away as the US, France and Canada.

At least 16 people in King & Snohomish Counties being monitored by phone for Coronavirus symptoms http://via.q13fox.com/DSPAY

'We're going to have to reevaluate our strategy'

US health officials believe the Wuhan virus has an incubation period of about two weeks, according to Dr. Nancy Messonnier, director of the CDC's National Center for Immunization and Respiratory Diseases, who spoke at a press briefing Friday.

But as recently as Friday, health officials said they thought there wasn't much risk of transmitting the disease during this incubation period.

"Based on what we know now about this virus, our concern for transmission before symptoms develop is low, so that is reassuring," Dr. Jennifer Layden, an epidemiologist with the Illinois Department of Health, said at the Friday briefing.

The news from the Chinese health minister should encourage health officials to change that thinking, some infectious disease experts told CNN.

"Assuming that Ma is correct, we're going to have to re-evaluate our strategy, that's for sure," Schaffner said.

Dr. Paul Offit, another longtime CDC adviser, said given Ma's news, he thinks health officials should alert people on the flights that the three US patients took from Wuhan that they might have traveled with someone who is infectious.

"I think the conservative thing to do would be to cast a wider net," he said.

In a fast-spreading, ever-evolving outbreak like this one, information often changes.

Ma, the Chinese health minister, didn't explain why he thinks the virus can be spread before someone has symptoms, leaving some experts skeptical.

"I seriously doubt that the Chinese public officials have any data supporting this statement," said Michael Osterholm, director of the Center for Infectious Disease Research and Policy at the University of Minnesota. "I know of no evidence in 17 years of working with coronaviruses -- SARS and MERS - where anyone has been found to be infectious during their incubation period."

Offit, on the other hand, said it wouldn't surprise him if the Chinese health minister is right and the Wuhan coronavirus can be spread while people are asymptomatic. Measles, mumps, rubella, and chicken pox all spread that way, he said.

Despite that, he said he's optimistic that the US can control the outbreak before it gets out of hand, as it has in China.

That's because the spread of the outbreak doesn't just rely on the time period of contagiousness. It also relies on how easily the virus spreads. Some viruses, like measles, spread easily even to people on the other side of a room. Other viruses spread only with much closer contact.

"But then," the Philadelphia-based doctor said, "I'm an Eagles fan, so I tend to be optimistic about things."