This isn’t a new tax credit — it’s been around since 1997. But it had previously only been available to Americans who earned enough income to owe taxes to the IRS. And minority parents were statistically less likely to qualify.

Biden changed that with the $1.9 trillion American Rescue Plan that Congress passed in March. It made the credit accessible to any family and raised the credit’s limit from it's $2,000 per child maximum.

Biden said it has the potential to reduce child poverty in the same way social security reduced poverty for the elderly.

"I think this will be one of the things the vice president and I will be most proud of when our terms are up," Biden said.

Harris said one unexpected expense could mean the difference between taking on more debt or losing it all. That why is was so crucial for the payments to be issued monthly.

"This tax cut will be issued in monthly payments. This has never happened before. In America, yes, it is a big deal. I have been fighting for months, and for quite some time – even when I was in the Senate – for monthly payments. Because if I know that the struggle to make ends meet is monthly, the solution has to be also."

Much like the stimulus checks the government distributed in 2020, the payments phase out at the $75,000 annual income threshold for individuals, $112,500 for heads of household and $150,000 for married couples.

Higher-income families with incomes of $200,000 for individuals and $400,000 for married couples can still receive the previous credit worth $2,000 per year.

RELATED: Child tax credit calculator: Figure out how much you’ll get monthly

The tax credit expires after this year, but Biden said expressed desires to see it continue through 2025, ultimately becoming permanent.

Even so, the expanded tax credit does not enjoy universal support in Congress. In a statement issued on Wednesday (https://www.rubio.senate.gov/public/index.cfm/press-releases?id=51BFBC5C-164B-4344-A3D6-F03B3AAB4139), Sen. Marco Rubio, R-Fla., Biden’s "child allowance" is "anti-work" and "anti-family" because recipients qualify regardless of employment status.

"In recent months, Americans have seen the destructive consequences that follow when the government pays people not to work," Rubio said*.* "These new payments will recreate the same problems and cause totally new ones. Not only does Biden’s plan abandon incentives for marriage and requirements for work, but it will also destroy the child-support enforcement system as we know it by sending cash payments to single parents without ensuring child-support orders are established.

Biden disputed those claims Thursday, saying 97% of recipients of the tax credit have wages or self-employment income, while the other 3% are grandparents or have health issues. 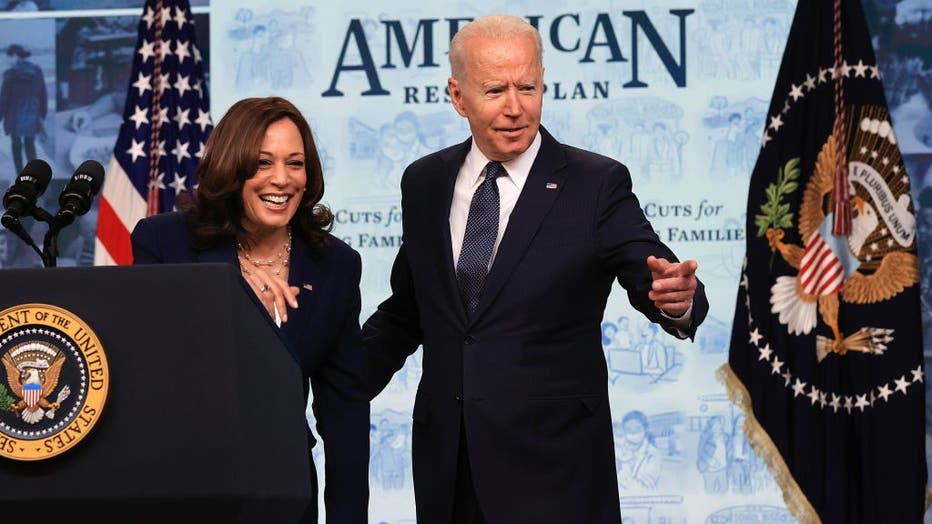 Before an audience of nine families that are benefiting from the new Child Tax Credit, President Joe Biden and Vice President Kamala Harris deliver remarks on the day tens of millions of parents will get their first monthly payments in the South Cour

Beyond the statistics, Biden used a real-life story to humanize his signature tax break. He spoke about receiving an email Thursday morning from a young teacher in Washington state.

She said she had just received her first payment and that it proved most timely. Her family had been strapped for cash while trying to put her through school so she could chase her passion of molding young minds.

"Millions of children and their families, starting today, their lives are about to change for the better," Biden said. "And our country will be better off for it as well. This is a really good day."